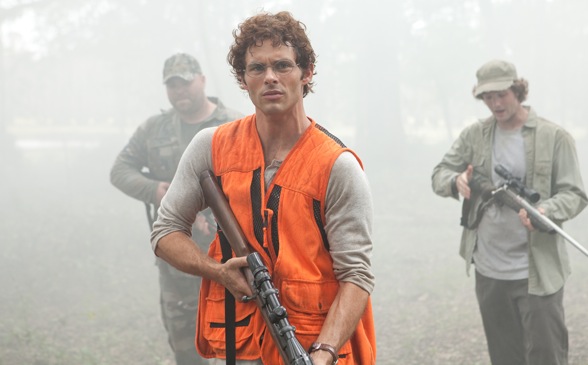 James Marsden as David Sumner in Straw Dogs
(Credit: Steve Dietl)
Writer/director Rod Lurie re-invents the controversial 1971 film Straw Dogs into a shocking and thrilling exploration of how far we will go until reaching our breaking point. Unlike the original, David, a screenwriter (James Marsden) and Amy Sumner, a television actress (Kate Bosworth), leave their high-style life in Hollywood and move to the deep South, where old acquaintances stir up tensions in their marriage, forcing them to re-evaluate each other and their relationship.

The film does a decent job setting up to the explosive confrontation to come, however, it is long and flat. Amy’s hometown of Blackwater, Miss., is a place where violence is a way of life, and life is defined by how the football team performs. Amy’s return to the town provokes resentment from her ex-boyfriend Charlie (Alexander Skarsgård) who can’t resist Amy’s braless jogs.

The clash begins when the daughter of a former football coach, played by James Woods, goes missing. With a series of coincidental accidents, the Sumners get trapped in the middle. From the beginning, David is provoked by Charlie and his friends and sometimes Amy herself, who all have an unyielding definition of what manhood is. Infuriating since Amy ends up being the main provocation, the rest of the film mostly follows David, as his tolerance wanes and the audience sees human behavior at its darkest.

The sexual assault on Amy leaves unfinished business and is never again addressed, which lessens her development as a character. The film would’ve been stronger than it already is if it left a couple clichés out of the picture. With them, it seems the only reason in changing the setting from England to America’s South is to be able to portray the “redneck on too much testosterone.”

Overall, the film is gripping and invigorating, in the sense that the “bad guys get what they deserve,” and you’ll be rooting for David in the end. It was interesting to see Marsden in a role not in his comfort zone. Bosworth is befitting as the hypocrite wife, but is forgotten rather quickly in the second half of the film. Get ready for a fun night full of beer, shotguns and bear traps.