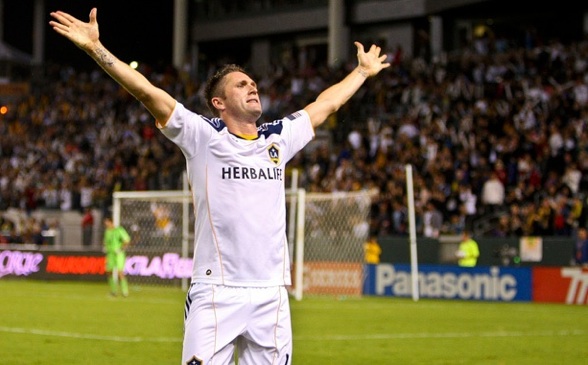 Robbie Keane celebrates his goal and the Galaxy's 3-0 win over Vancouver.
(Credit: lagalaxy.com)
Two Mike Magee goals and one from Robbie Keane propelled the Los Angeles Galaxy to a 3-0 victory over the visiting Vancouver Whitecaps FC at the Home Depot Center in Carson before 22,959 fans on Saturday. Galaxy head coach Bruce Arena did not think the result was indicative of the opponent’s performance, but he was pleased with his team.

“I don’t think that was an easy game tonight,” Arena says. “I’m pleased by our players’ efforts tonight, obviously it’s been a pretty full week that we’ve just experienced, and we will be experiencing full weeks for a little bit now. I like the attitude of our players, and hopefully we can try to keep a couple of them fresh as we move forward.”

With the win, Los Angeles improves to 16-3-10 for a league-best 58 points on the season; additionally, they remain atop of the Western Conference.

Magee gave the Galaxy a 1-0 edge at the 40th minute after assists from both Keane and David Beckham.

“It was great … He is dangerous at all times and even when we kind of have our backs up against the wall. He’s posing a threat up there,” Magee says of the goal and about Keane’s ability to pass the leather.

Keane managed to score his second goal of the campaign in the 64th-minute mark off an assist from Bryan Jordan before Magee added his fifth score 11 minutes later.

“It was a fantastic goal,” Keane confesses regarding his goal. “I went to the near post and then pulled back outside so luckily I got picked out. It probably was not my best game, to be honest with you, happy with tonight’s score.”

Jordan and Beckham recorded assists on the team’s third score of the night. Beckham now has 14 assists in 2011.

After a trip to Costa Rica for a CONCACAF Champions League match against LD Alajuelense on Wednesday, Sept. 21, Los Angeles returns to MLS action on Saturday, Sept. 24, as they travel to Ohio to take on the Columbus Crew at 4:30 p.m.