The Epoxies: Rock Your Day Glo Socks Off 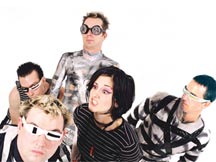 Welcome to Roxy Epoxy’s world. The amiable frontwoman for The Epoxies, who bears a striking resemblance to Siouxsie Sioux, is surrounded by men…constantly. "It’s fine, though. I have a masculine sense of humor, but it’s kind of hard at times. It’s all balls and feet." That aside, Epoxy and her bandmates, are causing quite a buzz with their New Wave-inspired music and sensational stage show. Not sensational in the "oh, that’s kind of good!" type of way, but sensational in a jaw-dropping, astounding, utterly original way. In short, live shows will never be the same again.

"The stage shows are pretty spontaneous," Epoxy explains. "The only aspect of the show that’s pre-calculated is the lighting. I’m pretty new at performing, and we’re all kind of shy, but it works." Their live shows involve masking tape, screaming, and spastic movements that resemble dancing, the Epoxies’ infectious energy harkens back to the days when bands actually performed, rather than standing still and looking sad. "I heard a lot of people say that we’re a novelty act with pretty good music, but it’s hard not to be seen as a novelty when the visual aspect are oriented into the band’s image." That said, their music is equally elevating, mixing elements from Blondie and Devo with more modern influences like fellow Portland-based bands such as The Punk Group and The Minds.

The Epoxies have only been together since 2000; the current band line-up has only been a cohesive unit for two weeks. But the tracks on their self-titled debut album (on Dirtnap Records) are perfectly crafted and buoyant——toe tapping and head bobbing is unavoidable while listening. With synthesizers enhancing their old-school ‘80s sound, the ultimate effect is nothing short of awesome. The synths combine with Epoxy’s voice to pierce the songs with laser-like efficiency, producing not only catchy songs, but songs that grab at the nostalgia in your core being, pulling you onto the floor for some serious dancing. "We never made a conscious effort to write New Wave songs. It just worked out that way. FM, our keyboardist, is well versed in vintage keyboards, so that added to the ‘80s mood of our music."

With the resurgence of ‘80s pop culture in the mass media market, the Epoxies may have an easier transition from counterculture towards mainstream appeal, yet Epoxy isn’t concerned with the band’s potential as a major influence in the future. "In the past, people closeted their likes, and since nothing new and interesting is in the market, they’re looking towards music that takes them back."

But the Epoxies aren’t all about nostalgia and the past. It is 2003 after all, and the world isn’t the same as it was in the early ‘80s. "We’re trying to focus on progressing. We hope that we evolve as a band. No closed mindedness, no neurotic behavior that keeps us from reaching different places." Epoxy, who is easy to laugh, gets serious for a moment. "We hope to stay around for a while." Undoubtedly, the band’s accessible and gracious nature during interviews will help ingratiate them to the media. Don’t let those charms fool you, though. They can still kick you ass…and have a good time doing it.