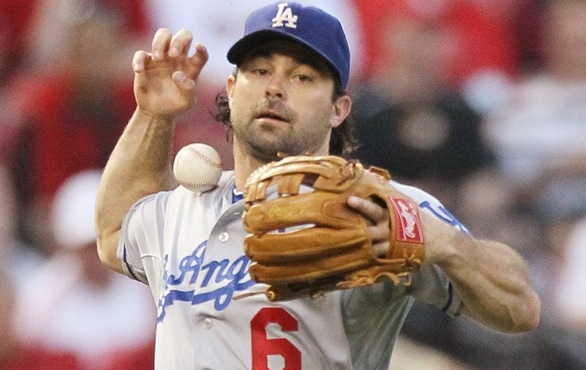 Third baseman Aaron Miles has been this season’s big surprise at bat.
(Credit: Chris Lee/St. Louis Post-Dispatch/MCT)
Looking over the starting lineup for Saturday's game against the Pittsburgh Pirates it occurred to me that the Dodgers were fielding only two position players from their opening day lineup. James Loney and Matt Kemp, once identified as the "young core," seem like old-timers when compared to the likes of Justin Sellers, Dee Gordon, Jerry Sands and Tim Federowicz, playing at second, shortstop, right field and catcher, respectively.

Not a one of these newbies are older than 25 years of age. And while they have appeared to have proven their salt so far in their minimal big league experience, the real credit for the Dodgers’ offensive outburst of late belongs to the “Big Kids.” According to Dodger manager Don Mattingly the acquisition of outfielder Juan Rivera was just the ticket to "stabilize" the lineup. Mattingly offered that having Rivera’s power bat behind Kemp allowed the center fielder to see better pitches.

Mattingly also noted the recent offensive contributions of Loney. The first baseman had been hurting for power and consistency up until about two months ago when the hits starting coming so that now he has raised his average to .283.

And then there is the “little guy,” 35-year-old Aaron Miles who has been the season’s big surprise as he become an everyday player and put up the numbers to justify it. Miles is hitting a National League-leading .362 with runners on base.

Of course when it comes to offensive production there is only one guy who immediately jumps to mind. To speak of Kemp’s contributions has become redundant at this point. Through the weekend Kemp connected for his 34th home run as he cruises to a .320 batting average.

One instance Saturday night seemed to typify the intensity and perseverance Kemp has demonstrated this season. He had just fouled a ball off his shin and was curled up on the grass in apparent agony with one of the Dodger trainers leaning over him. He recovered to limp back to the box where he promptly banged the next pitch to the gap in left center, on fresh legs Kemp might have gone for two bases. No worries, within several pitches he was off and running to conquer his 41st stolen base.

Explaining his quick recovery Kemp offers, “I'm always thinking about getting that extra base. I figured I better try for the steal in before the leg stiffened up.”

The Dodgers have been playing much better baseball in the last couple of months. In working themselves back up to the .500 mark they have discovered a confidence which only consistent winning can bring. Just in time to be ... well, too late. As September games dwindle down to a precious few it is all but impossible for the team to remain in contention. While the team has maintained a fighting spirit, it is hard to avoid the sinking sensation that comes with “meaningless” games.

Ruminating on the sentiment last Saturday while watching the ball game, my attention was caught by another sphere altogether. The moon was rising over the visitors’ bullpen. It had the loveliest honey-color and being not quite full, one side was softly shadowed suggesting that which was unknown. I was not the only one touched by the sight of the rising moon. Fans around me started to point and murmur. At one point even one of the Dodger videographers turned his camera to the moon, and there upon the big screen she was presented, the scarred surface reflecting brightly the light of the hidden sun.

This strange beautiful visitation seemed like some kind of mysterious omen. It seemed to speak of shifting seasons, of the inevitable passage of time. Perhaps, the significance was only that we were noticing it and not paying fierce attention to ballgame being played out by two teams all but out of contention. But the sudden appearance of such beauty is difficult to explain away quickly. And you feel like you have to take note, to honor the moment. So here are your 2011 Dodgers, a .500 team packed with young dreamers and a handful of vets led by a first-year manager, playing amongst the heavenly bodies.