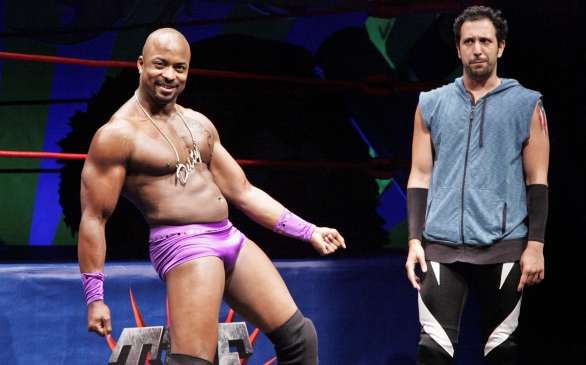 The adrenaline pumps in your veins, and a rush of excitement fills the air. The lights go out, the crowd cheers. The announcer takes his place in the middle of the ring as blue lights flash and dazzle. Fast music begins to pump and vibrate the seats. A stylish, robust man walks forward; hanging from his neck is the word “Deity” written in diamonds. Like any egotistical wrestler who speaks in the third person, he begins to speak of Chad Deity’s greatness. The crowd listens, like disciples, entranced with this man, this prophet. His magnetic force and strength is too great for himself to handle; the crowd demands Chad Deity. This, ladies and gentlemen, is the elaborate entrance of Chad Deity.

Making its West Coast debut at Geffen Playhouse, “The Elaborate Entrance of Chad Deity” slams racism, globalization and the manipulation of American viewers, in this case, through the wrestling industry.

Kicking it off is Macedonio Guerra (a.k.a. Mace), Puerto Rican-born and raised in the Bronx, he looks back on all those Saturday mornings watching WWE with his brothers. It was then that he realized he wanted to be in the big league. Well, he got there, only to be the fall guy for big-shot wrestler Chad Deity – not for lack of talent I can tell you that.

Mace divulges a lengthy but brutally honest explanation of the superficial and stereotypical strategy the wrestling industry follows in order to lure fans. Mace never gets a chance to prove himself worthy or to have a signature move, instead he’s the guy that makes the bad guy look good, he’s the guy that sells the bad guy’s image. And he’s happy to do it, all in the name and love of wrestling.

When he discovers Vigneshwar Paduar he sees his ticket out. As Mace and his shallow and profit-making boss, EKO, toss ideas on how to sell this Indian wonder, it is decided he will be called “The Fundamentalist!” Mace leaves the slums and takes a shot as manager. They will walk to the ring, turban and mariachi (Mace is after all Puerto Rican.) hand in hand to win the audience’s hate. Hate always sells.

Full of insulting yet hilarious wit, “The Elaborate Entrance of Chad Deity” will leave everybody entertained. The audience will soon see this play isn’t about the face of wrestling, it’s about the person that makes it happen. It’s an insightful look into a man’s shattered dream, as he seems to be the only real person left in the wrestling industry. A man, who believes in the community of wrestling, must sell his soul in order to do what he loves. Destroyed by the sport of selling an image and capturing every moment on national television, Mace confronts the thing he loves most and must choose between his dream and his dignity.