The Revolution Smile: Finds a Reason to Smile with Summer Ever 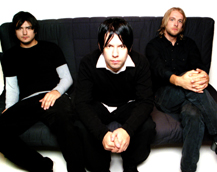 "I was always jealous of my friends’ parents that were into the Beatles. My parents were really into Elvis, and that was a bummer." Thankfully, The Revolution Smile’s frontman, Shaun Lopez, had an older brother who showed him there was more to rock ’n’ roll than Elvis Presley and kindled Lopez’s childhood obsession with KISS.

"I was really into music ever since I was 5 years old, I mean really into it. I was obsessed with KISS! Then, this guy that worked for my dad brought over this old hollow-body guitar one day, the first guitar I ever held, so I was so excited. I just held it and really wanted to play."

Although he was intrigued by music, the idea of actually performing onstage was quite intimidating to the young Lopez who recalls, "I used to go see all the bands when I was young and just figured that was on another level and I could never do that. I thought it was way out of my league or something."

Lopez’s love of metal persevered and then he met a friend who made him a mixed tape that included bands like Dead Kennedys and Black Flag. Lopez says, "I got exposed to this whole new music that was so different. I’d been to concerts, but this friend took me to my first show. I’d see the guitar player tuning his own guitar and loading his amp. It was at that point that I realized I can do this. These people are just normal, they’re not superstars and there’s not like this smoke on stage and all this other crazy stuff."

Lopez eventually went on to play guitar in the highly influential band Far, but it wasn’t until forming The Revolution Smile in 2000 that he began to really come into his own as an artist. "Early on when I first started playing music and some of the early Far stuff, you can definitely tell I wanted to be like this band and on another song I wanted to be like this band. But now I just never think about it."

With Octavio Gallardo on bass, Tim McCord on guitar and Jeremy White on drums, Lopez took on vocal and guitar duties for Rev Smile’s first major effort, Above the Noise, in 2003. The quartet toured the globe with the likes of Deftones and A Perfect Circle, introducing the masses to a sound that can only be described as a violently beautiful, deafening serenity – earsplitting, yet at the same time calming.

McCord and White have since been replaced by Michael Ryan and Stephen Hoke, respectively, and Rev Smile is armed with a new album called Summer Ever, a title which Lopez explains as follows: "To me this CD is about being happy. Summertime, to me, always seems like a time when people are most happy, whether they’re on vacation or the sun is out and shining. So, Summer Ever, like summer forever, happiness forever."

Lopez goes on to say, "The last record was more like individual songs put together as an album where I feel this record flows like a journey." The haunting melodies of the opening/title track flow into the driving bass and drums complemented by wailing guitars in "Are You Awake." The soft vocals of "I Was a Werewolf" are followed by the catchy beats and ferocious chorus of "Ringwald." Indeed, quite an aural odyssey and you’re not even halfway through the disc.

The songs of Summer Ever are even more potent witnessed live, especially "Maybe, Baby" when Lopez’s and Ryan’s crunchy guitar riffs are intensified by the passion behind Gallardo’s bass lines and Hoke’s pulse-pounding beats.

An outtake from Summer Ever appears on Double Blind Music's compilation {un}known, Vol. 1. Rev Smile also appears on Shot Full of Diamonds, a tribute album to Smashing Pumpkins, and will be part of an upcoming Failure tribute as well.

Rev Smile is constantly forging ahead, fueled by Lopez’s unfaltering devotion to music – "There’s nothing as far as an art form that I feel as passionate about as music. Some people look at a painting and they feel that certain thing from it or they go to the theater and watch people act and they get all into it. The thing that gets me is music. It’s just what I like to do."

The Revolution Smile will perform Sept. 13 at Chain Reaction in Anaheim and Oct. 2 at the Knitting Factory in Hollywood. For more information, visit www.therevolutionsmile.com.