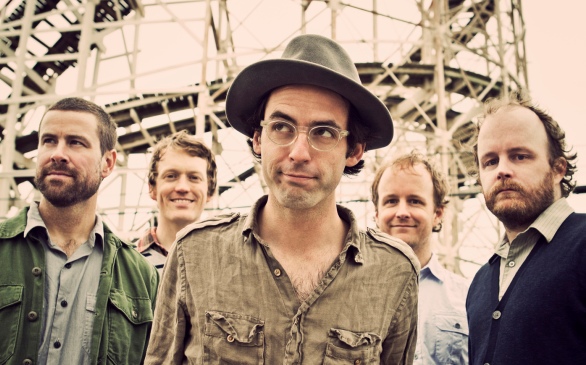 Alec Ounsworth hasn’t ever tried to follow in someone else’s footsteps. Like most musicians nowadays, though, he has had his own collection of influences since he began writing and recording songs as a teenager.

“There are certain models that I like to keep in mind as I’m doing this,” he says. “Sort of ‘where do I see myself in 10 years?’ And not to say I want to do precisely what other people do, but you gather what you can from people who have come before you.”

Maybe that’s why Ounsworth has heard the comparisons before. From the time he started Clap Your Hands Say Yeah with four friends from Connecticut College, the frontman has often been pegged as a David Byrne sound-alike. Truthfully, it’s an analogy that isn’t complete hogwash. Ounsworth’s vocal style is certainly reminiscent of Byrne’s distinctive yelp – with traces of Tom Verlaine (Television), Paul Banks (Interpol) and Jeff Mangum (Neutral Milk Hotel) also interspersed.

As a matter of fact, it wasn’t long after CYHSY started touring that Byrne was spotted at some of its shows. But don’t make the mistake of simply classifying the Brooklyn band as some sort of modern-day Talking Heads. The quintet, instead, squashes that notion on its latest studio album, Hysterical, after spending more than two years with producer John Congleton on the project.

What materialized on the 12-song LP is a more polished, focused sound that many critics expected to hear in 2007 with the release of Some Loud Thunder. CYHSY’s sophomore effort, however, received mostly mixed reviews after watching its self-produced, self-titled debut spread like wildfire across the Internet and earn sweeping praise just a couple years earlier.

At that point, CYHSY had already proven to the rest of the music industry that it doesn’t take record labels or public relations agencies to gain fame anymore. Online opinion, rather, had become a strong enough vehicle to carry a young indie band’s name from coast to coast.

“I was more hoping to find a group of people to play certain songs,” Ounsworth recalls about when he first started CYHSY. “None of us knew what we really had. I didn’t even know it was a band at first.”

Yet with Some Loud Thunder struggling to hook listeners in the same way CYHSY’s initial offering did, no one knew what was in store for a band still searching for its identity. Two years later, more questions regarding CYHSY’s longevity were raised when Ounsworth decided to take time off to work on a solo album and the debut release for his other band, Flashy Python.

“It sounds sort of ridiculous, but we just weren’t feeling the energy or the passion to make a record together at that particular time,” Ounsworth explains. “If we’re ready to make a record and if it seems to make sense, then we should. And if there’s any doubt, then there’s no reason to go into a studio and force the record. I don’t think that’s fair to anyone.”

So in the meantime, the other members of CYHSY began working on their own projects. While keyboardist/guitarist Robbie Guertin and bassist Tyler Sargent formed the band Uninhabitable Mansions, drummer Sean Greenhalgh started producing records for other indie rock outfits such as Takka Takka. Guertin also joined Radical Dads to play drums and sing, and keyboardist/guitarist Lee Sargent (twin brother of Tyler) took his talents to Hollywood, performing on James Lavino’s score to the Alex Karpovsky film, Woodpecker.

Nevertheless, the band’s public hiatus left fans skeptical of an eventual reunion, only to be reassured in May with the announcement of a third album that CYHSY wasn’t headed for a breakup after all.

“I didn’t want to dictate the pace of anybody’s life,” admits Ounsworth, who was born and raised in Philadelphia and still resides there today. “But it just so happened that when I was ready [to make another record], everybody seemed to be as well. That sort of set the tone.”

On Hysterical, that cohesion Ounsworth speaks of comes through quite clearly. Not only does CYHSY rediscover the melodic energy and spirit that first captivated the blogosphere back in 2005, but it also treads into unchartered territory with sophisticated, provocative balladry on tracks such as “Misspent Youth,” “In a Motel” and “Siesta (For Snake).”

“It would have been one thing if we had taken a break and for everybody to just sit around and wait for the next record, not doing anything with music or anything creative,” Ounsworth says. “It’s another thing that everybody remained active and actually saw a lot of new angles of how to approach records in that period.”

The album’s singles, “Same Mistake” and “Maniac,” stand out as some of the band’s best material to date. Like early favorites “Let the Cool Goddess Rust Away” and “The Skin of My Yellow Country Teeth,” CYHSY fuses thumping rhythms with beautiful harmonies and buzzing synths to make you realize that this isn’t just your typical indie rock fluff.

For a control freak like Ounsworth, striking that balance has taken him and his band mates nearly six years to perfect. And now that they’ve found it again, there’s no looking back.

“I feel like I really know what this project is,” he says. “Over the years I think I’ve been able to step back, relax and understand that there is something special about this project that I can’t put my finger on, but I’m just going to roll with it.”