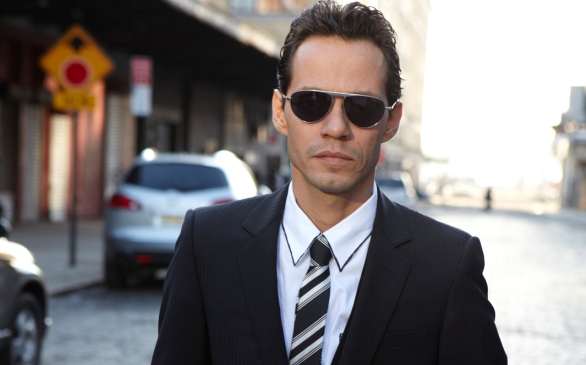 Marc Anthony is just like a fine bottle of wine that keeps getting better and better as it gently ages. Of Puerto Rican descent but born in New York City, this prominent music figure is scheduled to deliver two spectacular concerts at the Gibson Amphitheatre in Universal CityWalk this coming Saturday and Sunday.

Arguably the best voice the genre of salsa has ever witnessed, Anthony sports a fabulous musical repertoire. Having already sold over 11-million albums universally, he is truly considered an influence within the industry – and beyond. Anthony is also an entrepreneur and actor, who has appeared in several popular films. He is a minority owner of the Miami Dolphins of the NFL. He can be seen alongside Denzel Washington in acclaimed director Tony Scott’s Man on Fire (2004) and Martin Scorsese’s Bringing Out the Dead (1999). However, one of Anthony’s unforgettable acting performances comes via his role as salsa legend Héctor Lavoe in El Cantante, where Jennifer Lopez played his wife Puchi.

Music made him, though, and it is what has elevated his professional career beyond normal success. Anthony reached triple platinum in 1999 with his first English record titled Marc Anthony. This album featured the hit single “I Need to Know,” which became highly known to the world.

Once recognized in New York magazine’s Top 10 list of most influential New Yorkers, Anthony has released numerous salsa albums and singles. The hit song “Valió La Pena” (It Was Worth It), a melody that is too rich in rhythm to describe, is considered one of his most epic tracks. And one cannot ignore crowd favorites “Tu Amor Me Hace Bien” (Your Love is Good to Me), “Que Precio Tiene El Cielo” (What’s the Sky’s Price), “Celos” (Jealousy) and “Ahora Quien” (Now Who). All are pieces that Anthony is sure to sing at the upcoming shows.

Whether he showcases his traditional salsa tunes, classic covers from Lavoe’s career, popular ballads or his English tracks, Anthony is prepared to deliver unforgettable musical displays to Los Angeles.

Saturday’s show is sold out, but there are tickets available tickets for Sunday, which can be purchased at livenation.com or by calling (800) 745-3000.