The Script: Setting Passion to Music 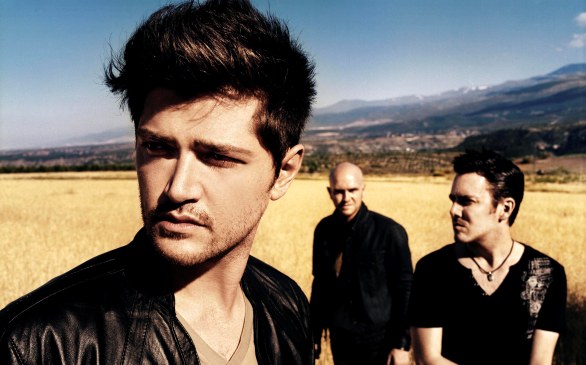 Perhaps it is their passion for music and songwriting, or even their desire to produce good times for their audiences that makes the Script memorable. Most likely you can recall and even identify with their hit single “Breakeven” from their 2008 self-titled debut album. And you are probably already singing the song’s chorus: “I’m falling to pieccceeeeesss.” "Breakeven" has sold over 1.7 million downloads in the U.S. alone. Furthermore, it reached No. 1 on Billboard’s Adult Pop Songs radio airplay chart. Had enough of a refresher course?

The album’s latest prominent single is “Nothing,” a romantic yet gradually up-tempo tune that will truly rock you. “I’m smiling, but I’m dying trying not to drag my feet,” sings O’Donoghue, but he does it in such a manner that can calm your heart and soul. It romantically fuels one’s believes of romance, relationships and life.

“It is about what people can relate to and an emotion to connect to,” Power explains, adding that it primarily stemmed from an anecdote from O’Donoghue’s life. “Who has not done that in life?”

Another track off the record is “For the First Time,” a melody of the troubles in a relationship because of the poor economy. Yes, the recession has reached the entire world, including Europe.

“We all have quite a bit of complaints,” Powers states of this particular tune. “There is the global financial crisis … we had to write it. It is a great song about those events.”

The Script has a track record for great songs. Their passion is instilled within each track’s lyrics and musical beats.

“Passionate, honest, emotional … those words really describe who we are, but above all honesty,” Power admits.

With regards to musical influences, the Script has many, but there is one particular instance with a certain group that instantly comes to mind and can never be forgotten by the band members.

“In our home country of Ireland, we got to play along with U2 at Dublin’s Crone Park,” a sincere, yet thrilled Power confesses. “That was humbling … believe me, that was rather monumental for us … of course, we got to meet Bono. It was a crazy, crazy event for us."

Power and the rest of the crew have also taken the stage with Take That and Sir Paul McCartney. The Script opened at New York’s Citi Field for McCartney, and they feel blessed for the honor. Other influences include the hip-hop group A Tribe Called Quest, Queen, the Neptunes, Timbaland, Van Morrison and the Police. Quite frankly, we can begin to understand why each member of the Script is so intensely passionate and devoted to their music: Their musical influences represent that as well.

The Script’s music has been included in video games and several well-known television shows. Some of these are “Waterloo Road,” “EastEnders,” “The Vampire Diaries,” “90210,” “Ghost Whisperer” and “The Hills.”

The Script, who met years ago on working holiday in the City of Angels, has an upcoming L.A. concert at the Hollywood Palladium on Saturday, Sept. 24, that is part of their Science & Faith Tour.

“The American crowd is respectful, and they hang around after our show,” shares Power. “When we visit Los Angeles and New York, we walk around the streets … we are happy to get the opportunity to play there.”

Whether or not you partake in their tour or listening to their repertoire, these three Dubliners indeed know how to cultivate the true meaning of music. In that sense, they are beyond powerful.

The Script performs Sept. 24 at the Palladium. For more information, visit thescriptmusic.com.