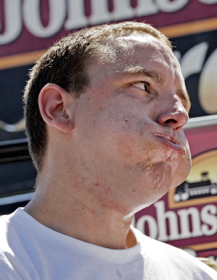 Just because you can eat 34 brats in 10 minutes, should you?

Watching professional eater Joey Chestnut struggle to coax down one final mouthful the size of a fist, one had to wonder. During a contest last week in Sheboygan, Wis., his face turned a sickly shade of crimson. His expression: extreme distress.

How much can a stomach bear?

After tense moments, the food went down, though it wasn’t enough to give Chestnut, a student at San Jose State University, victory in the Johnsonville Brat-Eating World Championship. He ate 341/2 brats; Sonya "The Black Widow" Thomas ate 35, about 10,000 calories’ worth.

Neither do some doctors at this point.

"It certainly doesn’t set a good precedent that we are promoting and using as entertainment binge eating," said Joseph P. Regan, a bariatric surgeon and medical director of the Bariatric Center at Columbia-St. Mary’s hospital. "I just think we’re sending the wrong message."

At a time when obesity has emerged into the public consciousness as one of the nation’s most serious health problems, people are binging for sport, the sports network ESPN is broadcasting the contests, newspapers, including this one, are covering the events, and countless Americans are following them.

Never has the spectacle of over-the-top overeating been more popular than it is today.

Eight years after the International Federation of Competitive Eating formed, the professional circuit it spawned has 100 events: everything from Spam to watermelon and cheesecake to chili.

There is even debate as to whether the person who scarfs down two pounds of candy bars in six minutes can be considered an athlete.

"Without any question I think of it as a sport. The issue is, does everybody accept it as such and I would grant you that not everybody does," said George Shea, IFOCE chairman. "But (eating contests) have been around for hundreds of years, and in my belief we are more fundamental and basic and essential than many other sports, such as tennis, which in my opinion is somewhat frivolous."

James W. Smith, head of gastroenterology at the Ochsner Clinic Foundation in New Orleans, was surprised to find ESPN broadcasting competitive eating and even more surprised to hear the eaters described as athletes.

"Oh that’s preposterous," Smith said. "It’s something that you may have to train for, but I hate to give the word athletic to it. It seems repulsive to call it that."

He added: "If you have a healthy gastrointestinal tract, you should treasure it."

Shea said that many of the top competitive eaters, including Thomas and Rich "The Locust" LeFevre are not overweight, but rather quite slim.

Thomas spends an hour a day on the treadmill. LeFevre and his wife, Carlene, another competitive eater, are fruit and vegetable fanatics, except on contest days.

On its Web site, the IFOCE says it "will not sanction or promote any events that do not adhere to the highest safety regulations. ... The IFOCE urges all interested parties to become involved in sanctioned events – do not try speed eating at home."

And so far no medical studies have documented serious injuries from competitive eating.

This may be testament to the stomach’s elasticity and resilience.

"The stomach in its native form has a tremendous capacity and can be stretched over time with practice," said Regan at Columbia St. Mary’s.

But some doctors worry that stretching the organ over and over may diminish its ability to function.

"I’ll bet if we studied some of these people we’d find their stomach doesn’t empty too well," said Smith.

After repeated stretching, he said, the stomach may no longer return to its normal size.

This could result in food staying in the stomach longer than usual and could lead to vomiting and nausea and promote acid reflux in the esophagus.

Vomiting, in particular, worries Christian Stone, a gastroenterologist and director of the Inflammatory Bowel Disease Center at Barnes-Jewish Hospital in St. Louis.

"From repeated or forceful vomiting there’s a chance that you could tear the esophagus," Stone said. "In the most severe case, if you tore the esophagus deep enough you will perforate all the way through the esophagus."

Such a perforation can cause food to leak out from the esophagus, leading to infection.

However, four professional eaters interviewed during the brat contest said vomiting is rare.

Thomas said she has never vomited though she had to make frequent trips to the bathroom after consuming 11 pounds of cheesecake in 10 minutes.

Tim Janus, a rookie on the circuit known as "Eater X," said he has never vomited after a competition.

A good burp, he said, often relieves the sick feeling.