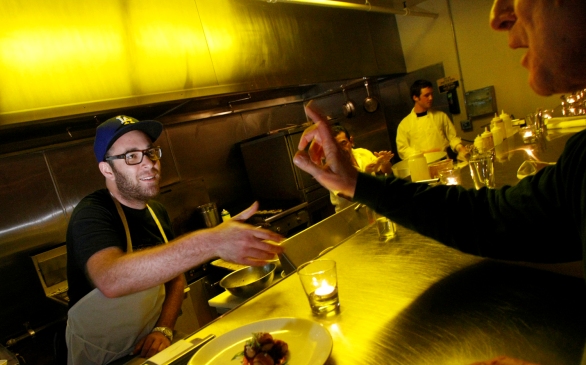 Labor Day Weekend turned into a labor of love with the annual the Taste event. The four-day, three-location event featured celebrity chefs, local restaurants and all the wine, liquor and alcohol you could think of. Each event – from “Burgers and Beer” in Beverly Hills to the “Food Noir” spectacular on the streets of Downtown – showcased cooking demos from recognizable chefs including Food Network star Giada DeLaurentiis, “Top Chef”’s Fabio Viviani and more.

Burgers and Beer kicked off the festivities with burgers from places like Ford’s Filling Station (lamb burgers) and the Yard (chorizo burger with red cabbage and guacamole), and craft beer pairings from all over the country.

On Saturday, the Tacos and Tequila Tryst spiced up Paramount Studios with all things tacos and one big tequila sponsor, Hornitos. I mostly looked forward to Red O’s offerings, since Rick Bayless created the restaurant’s menu. It’s received mixed reviews, but got a gold star from me with their “taco” of grilled shrimp nestled on a tortilla made of jicama. Nothing makes me happier than forward thinking in food. Unlimited choices from over 30 restaurants were featured, and even though it was all tacos all night, the food was not monotonous.

Sunday brought the most food of all, from Beverly Hills’ Fashion Bites Brunch to the afternoon Street Eats at Paramount, and if you were lucky, Desserts after Dark or Food Noir. I went to Food Noir, held in front of the Orpheum Theatre, which provided the perfect backdrop for the vintage-inspired food. My favorite of all was “Top Chef” Season 2 winner Ilan Hall’s beef tongue with croutons and a flavorful romesco sauce. I know tongue is not something most people think of trying, but once you do, I dare you not to be hooked.

For more information on next year’s event, check out thetastela.com.