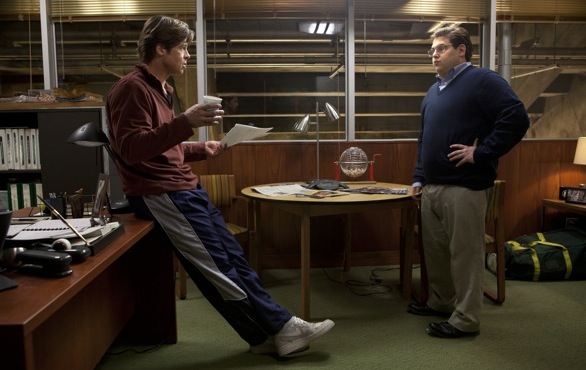 Brad Pitt, left, and Jonah Hill star in Moneyball.
(Credit: Melinda Sue Gordon)
Moneyball does an amazing job of satisfying both the avid moviegoer and sports enthusiast. At first I was hesitant when I found out they were making a film based on Michael Lewis’ acclaimed baseball book based on Billy Beane and his nearly perfected scouting strategy. I couldn’t see how they would take a very good story that certainly would have made an amazing sports documentary for ESPN’s 30 for 30 and turn it into a full-length feature.

My hesitant feelings were put to rest when I saw that Brad Pitt was attached to play Billy Beane. I knew he was the perfect person to portray the renegade general manager who changed sports history. And when I heard that Aaron Sorkin (The Social Network) worked on the screenplay and Bennett Miller (Capote) would direct, I saw a Best Picture Oscar nod waiting in February.

Moneyball is a film with great overall balance, and the acting is incredible. The chemistry between Pitt and Jonah Hill (Superbad, Cyrus) steals the show. From the moment the duo appears on screen, you feel like you are watching a real relationship between a driven boss (Pitt’s Beane) and his apprentice (Hill’s Peter Brand). Pitt is incredible in the role that should garner him even more recognition for his talents, while Hill shows that he has the chops to be taken seriously.

Miller successfully captures the duo’s journey in how they perfected a way to scout and harness unwanted talent, bringing the players together on a team and make them into champions. You’ve seen this theme in many sports films like Bad News Bears and The Mighty Ducks, but this time the story is true – Beane and Brand really did revolutionize baseball. If you are an avid sports fan and enthusiast you remember watching the Oakland A’s in 2002. Moneyball transports you back to the time, and by the film’s end you’ll want to stand up and cheer.