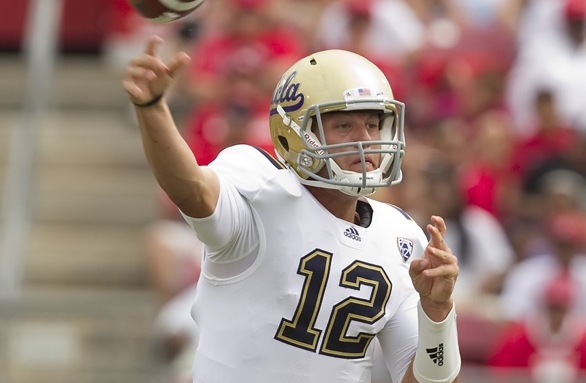 The Bruins found light after a 27-19 road win in Corvallis, Ore., over the Oregon State Beavers. UCLA is now 2-2 overall and 1-0 in Pac-12 play. With 1:36 left in the first quarter, the Bruins captured their first scoring advantage of the game, and they never would relinquish that.

Quarterback Richard Brehaut completed seven-of-11 passes for 146 yards and one touchdown, while running back Derrick Coleman gained 100 yards on the ground on 20 carries.

Up next for UCLA is a big test, as they travel to Palo Alto to face the Stanford Cardinal at 7:30 p.m. on Saturday, Oct. 1.

The Trojans went into Arizona with several pending questions, and they are coming back to Los Angeles with even more after an embarrassing 43-22 loss to the Arizona State Sun Devils in Tempe. With the defeat, the Trojans dropped to 3-1 overall and moved to 1-1 in Pac-12 action. One of the main reasons as to why USC suffered such a devastating loss is because the Sun Devils (3-1, 1-0 Pac-12) forced four turnovers on the night.

Junior quarterback Matt Barkley experienced a poor outing in the desert, completing 21-of-33 passing attempts for 227 yards and one touchdown. But the difference came in his two thrown interceptions. USC head coach Lane Kiffin did not sound happy about Barkley’s performance. “I thought Matt did some good things, at times,” Kiffin says. Barkley also suffered a fumble.

ASU got off to a fast start against the Trojans, as running back Cameron Marshall delivered a 70-yard rushing touchdown at 13:29 in the first quarter. The Trojans’ first lead came in the third quarter after running back Marc Tyler rushed up the middle for 10 yards and the score. From there on, though, the Sun Devils never looked back against a USC team that seemed confused at times.