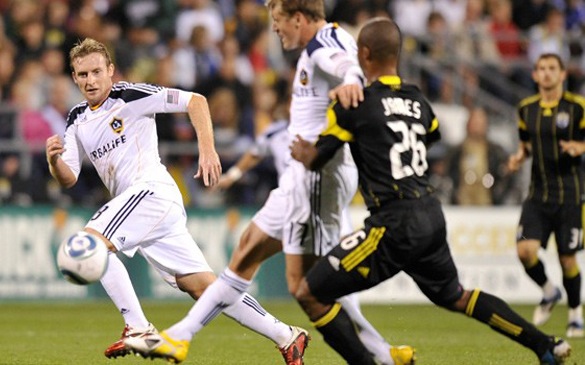 Midfielder Chris Birchall and the Galaxy scored a win against the Crew.
(Credit: lagalaxy.com)
Chad Barrett lifted the L.A. Galaxy to a 1-0 victory over the Crew in Columbus, Ohio, on Saturday. Barrett’s goal came in stoppage time of the second half before the game ended. His fifth score of the year came after he scored on a rebound from a Landon Donovan shot.

“We were fortunate to get that goal at the end, and I give Landon and Barrett a lot of credit for teaming up on that,” Galaxy head coach Bruce Arena says.

With the win, the Galaxy are now at 17-3-10 with a total of 61 points, which is a league best. They remain atop of the Western Conference and en route to the best record in the MLS.

Barrett acknowledges that the last few minutes of the game were difficult.

On top of being the first squad to reach the 60-point plateau in 2011, the Galaxy are also unbeaten against Western Conference opponents. They sport a 8-0-8 record that includes a 3-0-4 mark on the road.

David Beckham and Robbie Keane, two of Galaxy’s most precious assets, did not dress for the match.

Before squaring another MLS match, the Galaxy is scheduled to entertain Monarcas Morelia of Mexico on Wednesday, Sept. 28, at the Home Depot Center in Carson in their final home game in group play of the CONCACAF Champions League. The game is at 7 p.m. Los Angeles then faces Real Salt Lake on Saturday, Oct. 1, Fan Appreciation Day. Kick-off is set for 7:30 p.m.