Campus Circle > Music > Interviews > Against Me!
Archives
Music: Interview [Against Me!] 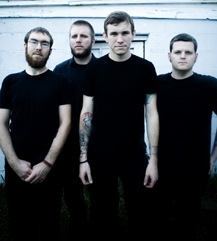 When you’re in a band, you’re well aware of how easily things break. Guitar strings, thrown beer bottles and maybe the heart of the lady left behind at the last tour stop. There’s one equipment failure, however, that is the traveling musician’s most dreaded bane: The van breakdown.

But a recent lack of wheels actually saved Against Me! a considerable amount of time and money.

The band was booked to play at Hellfest in New Jersey, a lengthy drive from their home base in Gainesville, Fla. Dozens of bands were motoring to the festival site, only to find out the blowout had been cancelled at the last minute.

But fate and Ford mercifully stranded the foursome before they could spend a small fortune on gasoline for nothing. Tom Gabel, guitarist and singer for the band, said Hellfest being cancelled was a blessing in disguise.

"We got this brand new Ford van, maybe four months ago, and it’s been in the shop for the past month and a half," he says. "It has been this long, drawn-out nightmare of trying to get this van fixed. It was supposed to be ready on the 16th, then the 18th – they just kept pushing it back. So the fact that Hellfest was cancelled sucks, but we’re like, ‘All right, we don’t have to worry about the van for a couple of days!’"

The van incident is a graphic example of finding a silver lining in the clouds, a result, no doubt, of the positive attitude currently being exuded by Gabel and his band, completed by drummer Warren Oakes, bassist Andrew Seward and guitarist/vocalist James Bowman.

The group put themselves in the shop to get a new mindset before recording their latest effort for Fat Wreck Chords, Searching for a Former Clarity. Full of strong statements, the disc mimics the band’s cycle of descent into confusion and then, ultimately, recovery.

The aptly titled "How Low" represents the nadir with lyrics like, "Here I am again/ six o’clock in the morning/ rolled up dollar bill in my hand." Gabel plays tremulous, on-the-edge guitar throughout, and says the feeling of impending doom that the song portrays was born of personal experience.

"The song is written in the first person," Gabel says. "I’ve had various troubles with drugs and alcohol abuse, but I’ve been sober for a while now. The whole album is really kind of journal entries from the last year or so of my life; take that for what it is."

Gabel speaks and writes as a man who has stared down his demons, chronicling the upswing on the second half of the record, beginning with "Joy." "The first half of the record is very dark up to that point," he says. "After ‘Joy,’ the record begins to redeem itself lyrically and it starts to come back around."

With the van and the band now hitting on all cylinders, Against Me! is about to embark on a four-month tour with the Epoxies, the Soviettes and Smoke or Fire. The Fat Tour is significant in that it will take the rockers to new frontiers as it touches down in all 50 states and parts of Canada.

What’s up for Against Me! after the 50 states? Global domination? Through a healthy laugh, Gabel ponders the idea. "I think I’m up for that challenge!"

Searching for a Former Clarity is currently available. Against Me! will play Oct. 28 at the El Rey in Los Angeles and Oct. 29 at the Glass House in Pomona. For more information, visit www.againstme.net.