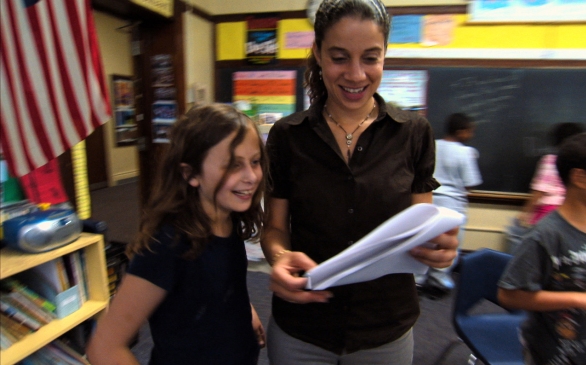 American Teacher reaches out to truly inspire and demand change within our corrupt educational system directed by Vanessa Roth and narrated by Matt Damon (whose professor mother is closely tied to the American school system). Roth weaves interviews of policy experts with startling facts as American Teacher tells the collective story of those closest to the issues in our educational system – the 3.2 million teachers who spend every day in classrooms across the country.

American Teacher details that Finland, Singapore and South Korea – which rank at the very top in the reading, math and science polls – all recruit teachers and pay for teacher training. In America we pay to become teachers while these rival countries offer good salaries, a professional work environment and high cultural respect for teachers. It’s no surprise that teachers remain in the profession and there’s a low turnover rate in these countries.

Better pay for teachers seems to be the main point of American Teacher. The film points out that it’s not so much beginning salaries that are at issue – although, in many cases they’re not all that great – but ending salaries that tend to be noncompetitive with other professions. We see a family man, a full-time teacher who works part-time at a second job to make ends meet. What this means in the bigger picture is that a lot of top talent is not attracted to the profession because of salary considerations.

The documentary argues that raising the salaries for teachers is a tipping point that will influence everything else and change the way the school system performs. In American Teacher, we recognize that the current budget crisis, whether on the city, state or national level, has hit school systems extremely hard. The film urges constituents to ask their legislators to put their arms around education budgets and truly revolutionize them; with an increased budget we can educate people that the teacher is the most important component, and we can restructure budgets to value teachers over other things.

American Teacher notes that a few school systems have already gone this route in places like Denver and North Carolina, and the result is fewer teachers have dropped out and graduation rates have gone up. But American Teacher is not just focused on the financial bottom line, it preaches a somewhat dream-world scenario but doesn’t tell how the American school system will be reformed, and that is what I had an issue with. American Teacher enlightens and informs, but I don’t put it on the same level as last year’s Waiting for Superman.