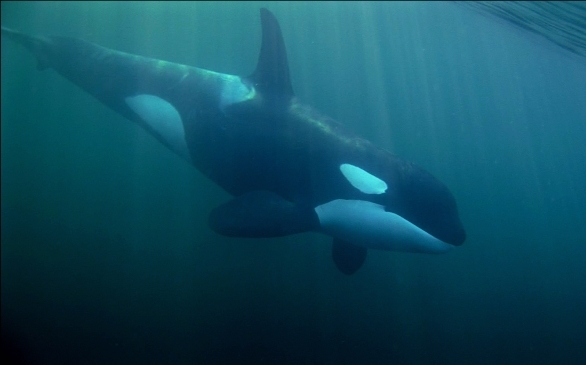 Right off the bat, the premise of The Whale seems ridiculous. A male baby whale with a feminine nickname loses his family somewhere near the Canadian coastline and then begins to befriend the locals. The story is narrated by Ryan Reynolds, who also serves as Executive Producer with ex-wife Scarlett Johansson. If movies like Free Willy don’t actually bring tears to your eyes, then you might have trouble getting through the first 10 or 15 minutes. But stick with it.

The Whale is not just a corny, over-the-top docudrama masquerading as a heart-felt exploration of human-animal relationships. There’s more to it than that. When Luna, the baby orca whale approaching his second birthday, finds himself alone in Nootka Sound off the coast of Canada, he sets off a series of events in the area that journalists Michael Parfit and Suzanne Chisholm are there to capture and document. Originally, they were to write a quick story on the international debate surrounding Luna’s future, but they end up staying well after all the media has cleared out.

Luna’s luck comes in waves. After an initial welcoming period, during which Luna befriends many of the local loggers and shipping staff in the area, the government steps in to prevent human-whale contact.

Watching Luna react to being cut off from her human surrogate family while also watching the locals rebel against the ban is one of the genuine heart-wrenching moments. Of course, the documentary sets all of this against a tear-jerking soundtrack and throws in interviews with people close to tears, but even without the fluff, it’s upsetting. It becomes an issue of right and wrong, not just safety for the animal as outlined by a few government officials and marine biologists.

An initial attempt to relocate Luna with his family fails miserably when a third group, local Native Americans known as the First Nationals, interferes with government officials. The group believes Luna to be the spirit of one of their recently deceased residents, and serves as a third faction of people who think they know what’s best for Luna.

In the end, the documentary asks the viewer two questions. However unintentional, the first one seems to be: Aren’t whales adorable? Yes, of course. But more importantly, it asks us to explore how we know what is right in the sense of what is the wisest choice and if that is that always the morally right choice as well.