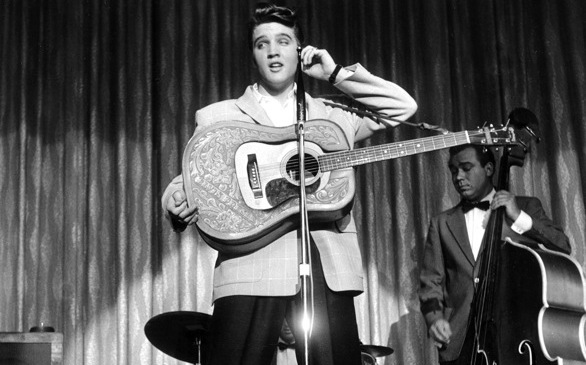 Many consider 1956 to be the birth year of rock ’n’ roll, and the reason can be summed up in two words: Elvis Presley. This five-CD box set is made up exclusively of Presley’s 1956 output, including all the tracks from Elvis Presley and Elvis, his first two albums.

B-sides from singles are appended to those first two discs, but it is on disc 3, The Live Performances, where things get really interesting. Some of the live material is culled from Presley’s last 1956 show at the New Frontier Hotel in Las Vegas; the crowd’s reaction is not heard clearly while the King rock-a-billys through “Heartbreak Hotel” and “Long Tall Sally,” but what you do hear is polite applause, not the complete hysteria that Presley would bring to Vegas shows many years later. The crowds hearing the same songs 10 days later in Little Rock were obviously much younger and hipper, as Presley has to push to be heard over the shrieks of his female fans.

The live recordings are quaint at best, keep in mind it was 1956, but listening to these various early versions of “Hound Dog,” “Don’t Be Cruel” and “Blue Suede Shoes” goes beyond mere entertainment; this is rock ’n’ roll’s biggest phenomenon ever in the making.

A full disc of outtakes is included featuring no less than eight takes on “Lawdy, Miss Clawdy” and the final disc features about an hour’s worth of interview segments. Everything here has been released before at one time or another, but this is the only collection presenting such a complete snapshot of Presley in the all-important year of 1956.