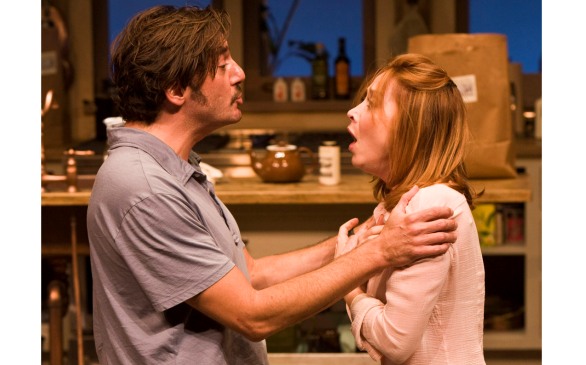 In Theresa Rebeck’s world premiere play, “Poor Behavior,” two couples who are old friends spend a weekend together in a country home. Peter (Christopher Evan Welch) and Ella (Johanna Day) are happily married. Maureen (a hysterical Sharon Lawrence) suspects that her husband Ian (Reg Rogers), an arrogant, pushy and relentless British man is having an affair with Ella.

After a night of heavy drinking and arguing between Ella and Ian, mostly about the meaning of “goodness” and American morality, Maureen is convinced the liaison between her husband and her friend is indeed true. She first confronts Ian, a master at dancing around the issue only to frustrate Maureen more. She takes matters into her own hands and proceeds to inform Peter who only thinks she is crazy and would rather not engage in any sort of talk with her. When Ian finally confesses to having started this bit of gossip, Ella looks like a deer caught in headlights. It all becomes one big uncomfortable situation, ultimately asking the question: If people already think the rumor is true, how wrong is it to actually do it? As in, actually “having” this affair.

One of the highlights of the show was when Peter, out of frustration because Ella is distracted by Ian, forgets to bring scissors out to Peter to cut leaves from a basil plant. He grabs the entire plant from its roots, brings it inside and throws it on the kitchen table without saying a word. It took Ella so long to grow that plant, and he just ripped it out of the ground – very telling of the situation. It was very funny and quite appropriate.

Doug Hughes’ direction was beautifully conducted. His cast never skipped a beat and kept their snappy dialogues and loud voices throughout. The scenic design by John Lee Beatty of a modern-day kitchen and living space with the small details of the marble top counter and copper plumbing was impeccable.

This show, though dark, is amusing and the characters relatable, often times a mirror of familiar personalities and situations in our own lives. I highly recommend it!