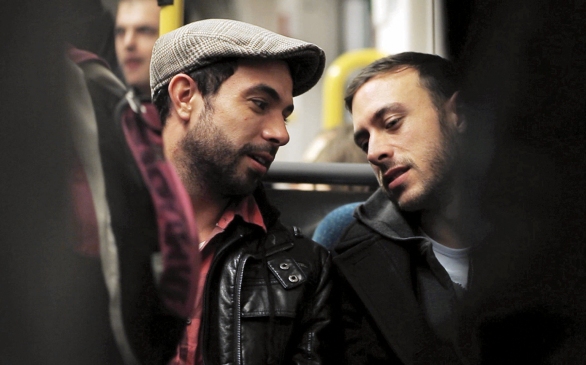 Have you ever had an uneventful weekend all of a sudden turn into one of the best experiences of your life? Well, that’s exactly what happens in Andrew Haigh’s Weekend.

Russell (Tom Cullen), a not-quite-out gay man, didn’t have an exciting agenda for the weekend. On Saturday, he planned on working as a lifeguard at the public pool, and Sunday he’d attend his goddaughter’s birthday party – all in all a pretty uneventful weekend in the colorless town of Nottingham. That is, until he met Glen (Chris New) at a gay club Friday night, and the two reluctantly fall for each other. They unexpectedly spend most of the next 48 hours together in bedrooms and bars, sharing stories and having sex.

From the start, they have different views on relationships. Russell is a romantic at heart, and Glen just wants to have fun. Midway through the weekend, Glen reveals that he is moving to the states to pursue his education. This causes both men to keep the other at a distance. However, as their deadline draws near we’re reminded that regardless of who we are or who we pretend to be, inevitably the heart wants what it wants.

Shot in a little more than two weeks and taking place over a little more than two days, Weekend is full of sexually honest scenes. The film’s writer-director explains, “My last film contained a lot of explicit sex, and while it has its place, I think it can often overshadow what is really important in a film.” Don’t be fooled, the film isn’t only about sex.

“If you watch most gay-themed films, you would assume that the only story worth telling was about ‘coming out’ or repressed love, but I wasn’t interested in that,” says Haigh. “I wanted to tell a story about two gay people just getting on with their lives and trying to find their place within the world around them. The intention was that the film would shed light upon the struggle to live an honest and authentic life in whatever form that takes, regardless of sexual preference.”

Haigh had previously worked in various editing jobs on films ranging from Ridley Scott’s Gladiator to Harmony Korine’s Mister Lonely. In addition to a number of shorts, he directed his first feature, Greek Pete, a no-budget story of a London rent boy that mixed dramatic and documentary elements, in 2009.

Weekend is a beautiful exploration of how two people can come together only briefly yet leave a lasting and profound impression on each other. When we dare to share, love always rules!