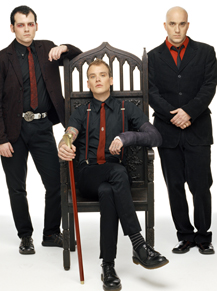 "The first time we did it, we were pretty nervous and I think it showed in the performance," says Alkaline Trio’s bassist/vocalist Dan Andriano of the band’s initial performance on "Late Night with Conan O’Brien." "But we just did again a couple of months ago and it went really well. Everyone was pretty comfortable and we had a good time."

After years spent pushing their way through the indie-trenches, Alkaline Trio has finally reached the top of the punk-rock heap with the release of its fifth full-length, Crimson (Vagrant). The strong and steady rise of the Chicago outfit – the band even has its own video game (www.emogame.com/alkalinetriogame.html) – can be attributed in part to the band’s nonstop sense of exploration and reinvention, both in style and sound.

"I’m happy that we experimented more with extra instrumentation," says Andriano, a passionate Chicago Cubs fan, of the new album. "Going forward with the strings and keyboards was a lot of fun. It’s a good way for us to write the same kind of songs we’ve always written, as far as the basic song structure, but keep it interesting so we don’t feel like we’re still writing the same song over and over again. Our main concern and our main goal is to make music we want to make and that’s it."

The result is a stunning, 13-track album filled to the brim with vivid lyrical imagery and hauntingly alive songwriting. "We all agree that it’s our best record," notes Andriano, speaking on behalf of fellow bandmates Matt Skiba (vocals/guitar) and Derek Grant (drums). "We’ve been able to play in front of a lot of people and we’ve sold a lot of records, but that’s not the most important thing to me," he says. "The most important thing to me is the kind of feeling I had when we finished this record. We all feel happiest about it."

As a one-time bassist for ska-punk supergroup Slapstick and later for the too-often-underrated Tuesday, Andriano is no newcomer to the pop-punk world. "Once a year or so I pop in a Slapstick record or something and check out what we were up to and, depending on my mood, I’m either really excited about it or I’m really bummed about it," he says. "Listening to myself 10 or 12 years ago is a weird experience. The difference in my voice and the difference in the way I play guitar or bass, it’s interesting.

"I guess not really bummed," he decides. "Maybe it’s just more that I’m happy about what I’m doing now."

Sinister, horror-inspired themes and pensive, alcohol-induced lyrics of love, loss, hate and hope set the Trio apart from its saccharine pop-punk brethren. And despite the band’s inclusion on such politically minded tours as Plea for Peace and Punk Voter, the Trio refuses to be categorized.

"We’re not a political band," says Andriano. "We all have strong feelings about a lot of political, ethical and social issues, but we can be a part of those causes, which is important to us, without changing how we write songs.

"We don’t have to get onstage and preach to a bunch of people about politics and why George Bush is the worst president in American history. We’re just able to go and do our thing and hopefully be a help in some way."

For the time being, the Trio’s cycle of touring and recording continues. "We’ll be on tour for this record for months and months, well into next year," says Andriano. "We just want to be able to keep on making records and playing shows.

"And the Cubs just won a game in the bottom of the ninth on a base hit single from Aramis Ramírez. So that makes me happy," he adds.