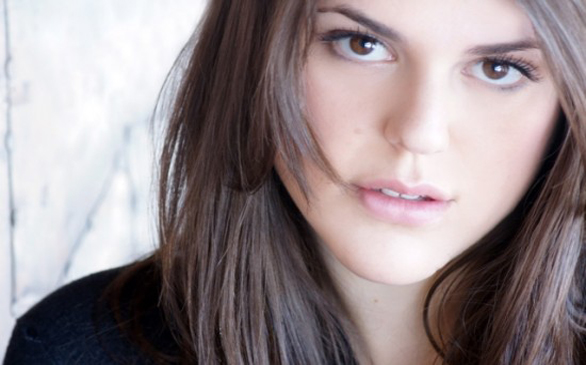 Many people with dreams of being an actor move out to Los Angeles after finishing high school or college. Many actors have dreams of making it: a job on a soap opera, a recurring role on a TV show or being able to land movie gigs. Soon after landing in Los Angeles, most actors find that there’s a certain thinner look that opens doors.

Let’s take a closer look at Molly Tarlov who plays Sadie Saxon on MTV’s “Awkward.” She’s not only a healthy looking actress, but she’s a sweet, down-to-earth and talented actress who’s opening the doors for many others who may not be the skinniest in the industry. With her talent and dedication to studying her craft, Tarlov has taken an industry character stereotype of the popular cheerleader and given it more depth.

Molly Tarlov: I think it’s something you don’t get into, it kind of gets into you. I remember when I was 6 and singing the “Chiquita Banana” song (laughing). I used to force my family to watch over and over again. I got into acting around the age of 10. My first play was “Hello, Dolly!,” and then it’s been uphill from there. The novelty of Molly rhyming with Dolly has worn off (laughing).

What are some projects you’ve done in the past that you see as huge stepping-stones to where you are now?

I would have to say my training helped to get me where I am now. I know that acting is not a project, but I worked really hard on my craft. I’ve performed in a lot of plays and studied acting. Studying has given me a lot of opportunities that I have now.

Right now I’m working on something I’m writing with my friends. It’s a bunch of little vignettes about being a girl living in L.A. It’s pretty funny, I think, I hope. We’ll soon have a Web site to put it up. I’ll also be shooting an indie film that’s opposite of the Sadie Saxon character I play on “Awkward.” Hopefully there’s another project brewing in the near future.

There are so many that’s it’s hard …The most special moment for me right now is when fans come up to me, to talk about the character Sadie on “Awkward” and when they want a picture of me.

Yes, definitely. I would say the only way we get better is by doing. Make sure to take classes and audition for as many things as you can. The most important thing is to love the craft. Do not just try to do it to get jobs, to become rich and famous. Do it all the time because you love it, and everything will fall into place.

No Web site yet, there will be soon. But I tweet about work and other cool updates. Fans can go to: twitter.com/mollytarlov.

I see myself writing and acting. Hopefully I’ll be back and forth between L.A. and New York. I also see myself getting married, having kids and a dog. In addition, I hope to by then have appeared on approximately 17 TV shows and obtain 80 movie credits. How does that sound? (laughing)

Is there anyone you’d like to work with? Why?