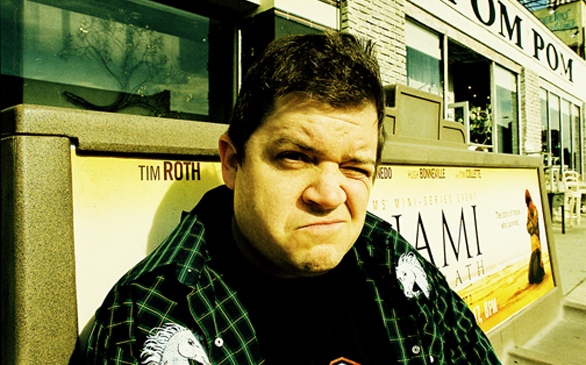 With the name of a World War general and the rapid-fire, no holds barred blasts of laughs akin to a comedic Gatling gun, Patton Oswalt is ready for war. A prominent name in the world of stand-up comedy, Oswalt has slowly and steadily climbed to the ranks into the upper echelon of American comics.

He’s lent his voice to Pixar, Showtime and Paul Thomas Anderson, and his seemingly unending list of cameos and bit pieces has helped establish him as a sort of “that guy” of the pop film industry, a fact no doubt confounded by his short stature and cherubic aesthetic.

Comic, actor, writer and (lately) father, Oswalt is no doubt a man of considerable talent. His comedy is more or less comprised of everything including, but not limited to, sweatpants, fatherhood, crack heads and comic books.

With the release of his fresh Showtime special and comedy album, Finest Hour, Oswalt steps into the spotlight once again. His comedy is seemingly without direction, and in this case, that is a wonderful thing. Frankly it’s all over the place. It’s a kind of stream of consciousness comedy, as if William Faulkner developed a sense of humor and started walking the streets of modern-day Manhattan. It’s sensational and, quite often, hysterically funny.

Hailing from a strict military family from Virginia, Oswalt took to comedy early, hitting trendy clubs and developing a name for himself.

“I followed where the good rooms were, and that eventually led me out west, from San Francisco to Los Angeles,” he says.

Getting in front of thousands and talking about your penis would be seemingly difficult to the general public, but Oswalt serves to exemplify the shameless, hard working and ultimately gifted nature of the successful modern comic. Like anything in life, his career – a seemingly starstruck, highly lucky series of coincidences – boils down to something much simpler.

“Get on stage as much you can. It’s the only advice that works. People are always looking for something more complex or mythical, but it’s really that simple,” he shares. “The minute someone asks if there’s something else to it I know they’re not going to make it. How do you become a good football player? You practice all the time. How do you become a good chef? You cook all the time. There is no other way.”

Though still somewhat vague to the general public eye, Oswalt has had more of an impact than most would believe. With a breakout performance voicing the culinary bent dreams of Parisian rat Remy in Pixar’s Ratatouille, Oswalt made a voice for himself in one of the more eccentric ways possible, through animation.

This fact alone is ironic given the highly animated, amazingly unique nature of Oswalt as an onscreen entity. He’s had bit roles in movies such as Magnolia, Observe and Report and The Informant!, not to mention a myriad of television shows including “Bored to Death” and “Community.” But his role as the lovable Neil in the critically acclaimed but ultimately doomed Showtime drama “United States of Tara,” would stand as a great testament to the power of the ratings board as well as the public eye.

“It was a really great show. It was extremely well written, and they gave me a great character that was really developing. But I guess the ratings just weren’t there. At least I had the chance to be part of a brilliant self-contained narrative. I got to work with Toni Collette, and honestly, the experience couldn’t have been better,” he says.

Keeping busy regardless, Patton recently wrapped a role in Jason Reitman’s Young Adult, the director’s second collaboration with buzz writer Diablo Cody, who ironically enough was the co-creator of “United States of Tara.” In regards to working with a trendy, popular director like Reitman, Oswalt notes that “it was an amazing experience. He is a huge film geek, so it was really fun to work with another film nerd.”

Oswalt’s accessible, highly contagious comedy has made fans out of even the most jaded, stone-faced narcissist around. His cinematic career is taking off at a seemingly record pace, and with the release Finest Hour, there’s been no better time than the present to hop on the Oswalt train.