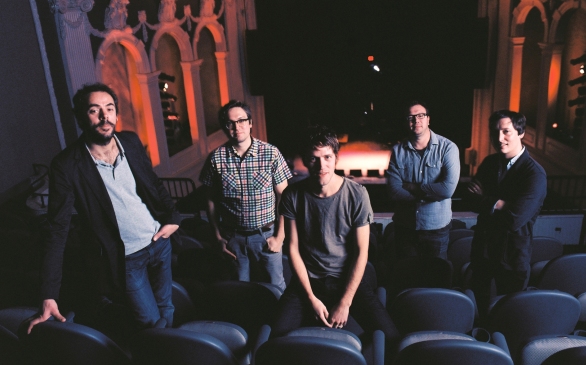 When Gomez first burst onto the scene more than 15 years ago, it didn’t take long for people to notice what was coming out of Southport, England. Brewing a cup of rock, folk, blues and electronica on its award-winning debut, Bring It On, the band was quickly commended for taking an actual “alternative” approach to the status quo.

Shying away from the sound of its British counterparts – whether it was the Beta Band, Elbow or Reef – Gomez, instead, showed a disregard for the path those other indie rock outfits were following.

“We were bemoaning the fact that music was so tied into genre,” band member Tom Gray remembers when the five-piece first started playing together. “It didn’t feel like people were really experimenting with genre. They were experimenting with sound, but not genre.”

Yet that’s what Gomez does best.

While they’ve quietly slipped into veteran status these days, Gray (vocals, guitars, keyboards), Ian Ball (vocals, guitar), Ben Ottewell (vocals, guitars), Paul “Blackie” Blackburn (bass) and Olly Peacock (drums, synths, computers) haven’t ever let themselves fall victim to one genre. From its psychedelic tendencies on Liquid Skin to its electronically inspired moments on In Our Gun, Gomez has won over fans with its ability to transition from one musical style to the next without complication.

Such yearning for the undiscovered is what had Gomez back at work a little more than two years after returning to its free-form roots on A New Tide. This time, though, Gomez was ready to conduct a different experiment. Unlike in the past where genres had been mixed and matched rather seamlessly, the band was ready to focus on another aspect of its songwriting.

“We wanted to break with our own clichés,” Gray admits. So when Gomez made its move for Charlottesville, Va., to record its seventh studio album, the band’s members wanted someone who could tame their slapdash approach to song structure. They wanted someone with not only a wealth of experience writing and producing pop songs, but also a familiarity with their entire catalog.

That person would be Phantom Planet bassist Sam Farrar, a longtime friend of the band who was asked to act primarily as editorial consultant.

“The only thing we don’t twist ourselves to do is to deal with structure,” Gray says. “We wanted someone else in the room to police us and to sort of go, ‘Get your shit together, lads! Stop doing that!’”

Months later, and you can feel Farrar’s influence make its way onto the self-produced Whatever’s On Your Mind. At just 38-minutes long, it’s Gomez’s tightest body of work. That doesn’t mean it comes lacking in substance or quality, however.

The album’s hit single, “Options,” opens the 10-song LP with a punchy acoustic guitar riff, backed by a barrage of brass that propels it into power-pop territory. The ensuing track, “I Will Take You There,” pursues a similar formula, meshing horns with charming keys and a swinging beat on the skins.

“This record is the peak of what we can do in terms of writing a pop record, even though it’s not a pop record because it’s far too mashed and scattershot to be a pop record,” Gray explains. “But it’s as close as Gomez can get to that.”

Of course, Whatever’s On Your Mind doesn’t come without the typical Gomez trademarks. On the album’s title track, Ottewell’s raspy vocals carry a string-laced melody from verse to bridge to chorus and back. Ball, meanwhile, can be found searching for introspection on the next cut, “Just as Lost as You,” as the band erupts midway through for a heartwarming finish. It may not be what hooked early Gomez fans back in 1998, but they shouldn’t expect the freewheeling band to follow the same course of action the next time in the studio.

“The next thing we do evidently will have to be non-linear again and a little crazier because we did this now,” Gray says. For now, the band’s latest undertaking has sent it across Europe and over to Australia and the United States, with appearances at the Dave Matthews Caravan in Chicago and Austin City Limits this past summer. But Southern Californians may be the luckiest fans of all as the band closes its tour with back-to-back dates at the House of Blues Anaheim and Sunset Strip on Oct. 4 and 5.

It should mark a special moment for Ball, who moved to Los Angeles in 2004, as well as the rest of the band, which represents Brooklyn, N.Y. (Peacock), and Brighton, England (Gray, Ottewell and Blackburn), nowadays.

Gray, for one, is well aware of the shows’ significance.

“It’s going to be a party,” he quips. “We know so many people in L.A. There will be so many friends in the room. Let’s just make it a party.”

Knowing Gomez, that shouldn’t be a problem at all.