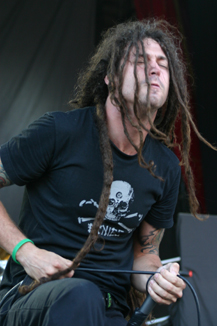 Ozzfest’s annual San Bernardino stop, located once again in the dusty wasteland of the Glen Helen Pavilion, was probably the most memorable show in the festival’s 10-year history, but not for the reasons one would hope.

The second stage is always a crapshoot, but this year the good bands definitely outweighed the forgettable metalcore acts. Soilwork woke up the audience with their aggro-tinged Swedish metal, and the aggression continued with second-stage highlights Arch Enemy. The band tore through its best melodic death-metal anthems, guitarist Michael Amott showing off his considerable skills and female growler Angela Gossow showing off her, er ... stage presence. Trivium had a tough act to follow, but surprised with its fist-pumping metalcore rockers – although its members need to ditch the mascara. The Haunted, the heaviest band of the day, gave the mosh pit plenty of material to work with. Finally, the always-unpredictable Mastodon turned its best post-metal crunchers into extended jam sessions.

It was impossible to see second-stage headliners Killswitch Engage and Rob Zombie through the apocalyptic dust cloud kicked up by the pit, but they sounded good.

Fortunately, the main stage was a good distance from the dirt lot of the second stage. People arrived in time for the tightest Black Label Society performance I’ve seen at Ozzfest – no ranting, just the band’s best macho-bullshit biker songs. Thrash band Shadows Fall capably followed, proving itself truly arena-worthy; even the fat heckler in front of me was throwing devil horns by the end. I slept through nu-metal leftovers Mudvayne, and I wasn’t the only one. Slipknot, on its only Ozzfest 2005 appearance, entertained as usual. The band’s turntablist attempting to climb up a drum kit, while it was being lifted in the air by hydraulic risers, highlighted the band’s energetic stage show. Maybe he was trying to reach God.

Everything was going well, so nobody was prepared for the debacle that was Iron Maiden’s set. Whenever you see Iron Maiden, you can expect a truly epic experience – changing backdrops, giant stage props, the singer dressing up – and the band did not disappoint. In fact, it was actually one of the best performances I’ve ever seen: powerful, blazing and furious. And they were entitled to the fury.

In the most embarrassing and unprofessional series of events in Ozzfest’s history, Maiden’s set was plagued by a series of nasty onstage pranks: A man walking onstage waving an American flag, a torrent of eggs, the PA getting cut three times, Sharon Osbourne herself calling Iron Maiden’s singer a "prick." The politics involved or who was responsible is unclear, but it was a sad thing to see play out in front of 45,000 fans.

By the time headliners Black Sabbath took the stage, there was a noticeable thinning of the crowd. The band performed competently, and Ozzy, while not exactly at his peak, had a ton of energy. Included in the band’s set-list were some rarely performed songs, but the mood of the evening had already shifted.

Memorable, indeed. One of the best Ozzfest lineups ever, great performances and a passionate crowd. Unfortunately, what people will really remember is the night that backstage problems spilled onto the main stage for all to see.