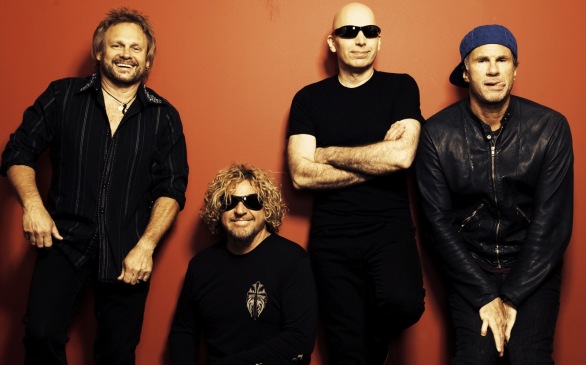 Music never dies. As long as you keep it in your soul you can keep creating and sharing with the rest of the world. And just because you might be in one band, it sure as hell doesn’t mean you have to only play with them.

Artists have formed what we call “supergroups” long before the days of Audioslave and Velvet Revolver. Look at Temple of the Dog, Mad Season, or even further back … the Yardbirds. Great musicians have always wanted to play with other great musicians because it’s in their blood. So, when I sat down to talk with legend Joe Satriani about the latest offering from his group Chickenfoot, we had a lot to go over.

Chickenfoot is comprised of Chad Smith (drummer for the Red Hot Chili Peppers), Sammy Hagar (Van Halen frontman), Michael Anthony (Van Halen bassist) and, of course, Satriani on guitar. So, with this heavy arsenal of talent, do you think they go on stage and do RHCP or Van Halen songs? Not a chance.

“We set the tone for the first album, and we toured clubs beforehand,” says Satriani. “We have to show people that we’re fun, to be a band that you can see in a club, even if they don’t know our music. There’s something there when we play together, and we wanted to prove to ourselves that we could go in front of 400 people and rock the house and share that feeling with them. And it works.”

That is the lure of this band. Seeing them live at the Roxy last year was entertaining and exciting, and they didn’t play one song anyone knew. That’s when you know you’ve got something special: when you can take the stage in Hollywood and get the crowd moving to music they’ve never heard before.

The heart is in the songs, and it’s interesting to learn how it all comes to life.

“I’ll write the whole thing, bass and drums. Throw everything out there and then wait and get feedback from everyone else,” shares Satriani. “Every once in a while Sam will say he won’t sing a song, and we’re tellin’ him that it’s good. And sometimes I’ll write something, and they wont like it. But we are very open. And we trust each other. That’s why it works. You have to be open to new ideas.”

Satriani goes on to another example of the writing process: “The song ‘Different Devil’ on this new album, was one of my acoustic demos that was going in a different direction. But the guys said it was more commercial. Chad took it and played with it, and then Sam said he could sing a chorus over it. After weeks of writing and re-writing, well … who would have thought the drummer would walk in with the chorus?”

The new collection of songs on the album, Chickenfoot III, definitely sounds different – in particular, “Three and a Half Letters.”

Satriani explains, “We record live. We don’t use clock tracks or sequencers. We just play. Everything about that song is live except in the chorus I added a second guitar.”

But when you listen to this brutally intense song, it seems like there’s more to it, and there’s a very good reason as to why.

“Our manager, longtime friend and music industry legend, John Carter came to us and said we need to do a song where the guy is saying that he needs a job, not all that material stuff. He just wants to work, just needs a job. And Sam gets these letters from people going through some hard times and gets the idea to put them together. Sammy said, ‘I just want to read these letters, and scream, and I want the guitar to go crazy,’” comments Satriani. “By the time we got to record it, Carter had passed away from cancer very quickly and from out of no where. It was tough dealing with the loss of one of the guys. That song was recorded after we said our goodbyes. And we got a live take of the song. It was an intense moment. I think he would be proud.”

So when you go to listen to the album keep in mind that what you’re hearing is live and from the heart. Nothing gets more real than that.

With Chickenfoot III hitting streets this week, a tour is being developed and they have even joked about going on the road with Van Halen, but that is far off in the future, if at all. Be sure to pick up the new album and listen to some of the best recorded music you’ll hear all year long. And catch the live show; it’s one hell of a way to spend a night!