Kings' Doughty: Glad He Can Focus on Hockey Again 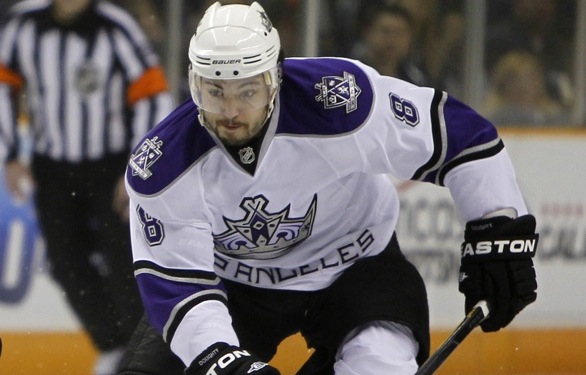 Kings' fans are relieved that Drew Doughty is staying.
(Credit: Nhat V. Meyer/San Jose Mercury News/MCT)
Heavier in the wallet, and lighter on the ice ... Los Angeles Kings defenseman Drew Doughty, proving again that you can be richer and thinner, was getting reacquainted with his usual line of work in El Segundo on Friday afternoon after signing an eight-year, $56-million contract with the organization. Before a quick session on the ice, Doughty met with a handful of reporters and disclosed that he is 203 pounds, about seven pounds under his usual playing weight.

Now back to those other, well, important numbers, more meaningful than the Kings’ 3-1 victory against the Anaheim Ducks at Honda Center on Friday night. Although Doughty is the Kings’ highest-paid player – by average annual value – teammate Anze Kopitar will receive more in actual payments over the next five years, by design. The first five years of Doughty’s deal are worth $33.3 million to Kopitar’s $35.6 million. The ending might have been sweet, but the journey pretty much stunk, according to Doughty.

“I didn’t plan being back home in London [Canada] for that long,” the 21-year-old says. “I had a lot of stress going on. The season was approaching. I was counting down the days till the season started. At first, I didn’t want to miss camp, either. I’m not happy that I had to go through all that. But it’s done and I’m happy I’m here. I apologize to all those who had to patiently wait for me to get here.”

Count Kings coach Terry Murray among the patient ones.

“There shouldn’t be any animosity whatsoever,” Murray says. “This is just business in pro sports today. Players and the agent doing what they feel they need to do in order to get a contract resolved. It happens. He was not [saying], ‘I don’t want to play.’ He wants to be an L.A King.”

The Kings won’t be using a light touch with him.

“Gas pedal right to the floorboards,” Murray says. It was offered that it sounded like a sports-car approach. “Lamborghini approach,” Murray says, smiling.

Certainly, Doughty could raid a dealership. For now, it will be simpler things, such as getting his old spot back in the dressing room, the space now occupied by defenseman Slava Voynov.

“He bought it. He can afford it,” Kings defenseman Matt Greene says of Doughty. “It’s great. Everybody was confident it was going to happen. It was just a matter of time.”