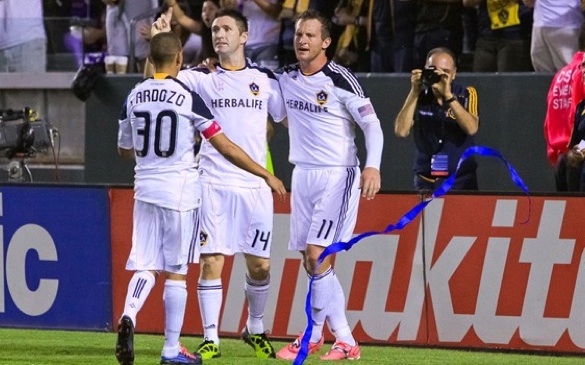 The Galaxy celebrates a Chad Barrett (right) goal.
(Credit: lagalaxy.com)
A score from Chad Barrett and an own goal lifted the L.A. Galaxy over visiting Real Salt Lake, 2-1, over the weekend at the Home Depot Center in Carson with 27,000 in attendance. The victory improved the Galaxy record to 18-3-10 on the season with a league-best 64 points. Los Angeles remains with the best mark in Major League Soccer, while staying atop of the Western Conference.

“I thought it was a good game by two good teams. It was nice to have our team really challenged to come from behind. They weren't the prettiest of goals. We were aggressive. We kept our composure. It’s obviously a really good win for our team,” Galaxy head coach Bruce Arena says.

Off a Javier Morales assist, Real Salt Lake’s Fabián Espíndola gave the visitors the 1-0 lead in the 45th minute of play. Down by one goal, it was not until the second period where and when the Galaxy embarked on a comeback.

Fourteen minutes into the second half (59), Barrett equalized the score. His sixth goal is second on the team. Midfielder David Beckham received credit for his 15th assist.

“I talked to Beckham and told him that if he would send it up the field that I would start running, and it worked out that way. He played a really nice ball into me,” Barrett comments.

The Galaxy gained the lead and eventual game winner in the 72nd minute off an own goal, deflected by Real Salt Lake’s Nat Borchers.

“I think that’s important, and that’s good. It was a good team we did it against, a good defensive team we did it against,” captain Landon Donovan says of the comeback win. “I think when you continue to put that kind of pressure on a team, on the backline, you would hope that eventually you are going to break them down, and a couple of them did and our guys made different plays to help score goals.”

Los Angeles has three games remaining, including their season finale at home against Chivas USA on Sunday, Oct. 16, at 6 p.m.