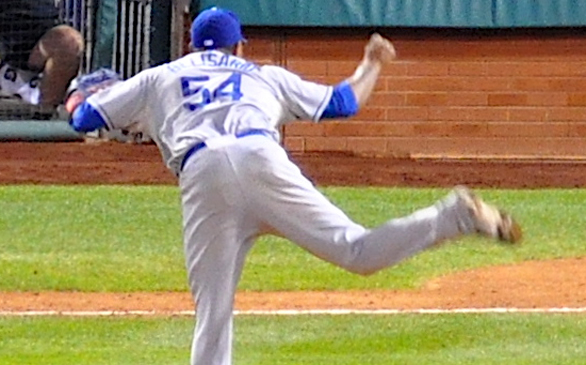 USC quarterback Matt Barkley celebrates one of his four touchdown passes against Arizona.
(Credit: Wally Skalij/Los Angeles Times/MCT)
Both the University of Southern California Trojans and UCLA Bruins football programs saw action over the weekend, but only one came out victorious.

After suffering their first loss of the season, the Trojans delivered quite the offensive performance against the visiting Arizona Wildcats at the Los Angeles Coliseum. Now, USC is 4-1 overall and 2-1 in Pac-12 play. Meanwhile, Arizona dropped to 1-4 and 0-3, respectively.

Junior quarterback Matt Barkley and sophomore wide receiver Robert Woods have led the offense for the Trojans all season, and that continued against the Wildcats in the team’s 48-41 win. Barkley threw for a school record 468 passing yards and four touchdowns on 32-of-39 attempts with one interception. He connected with Woods 14 different times for 255 yards and two scores. What a duo, right?

After one quarter, the Trojans held a comfortable 17-0 edge. However, Arizona mounted a comeback when they posted 12 points in the second quarter. What really kept the game from reach was USC’s 10 points in that period. USC led 27-12 at halftime, particularly because of kicker’s Andre Heidari’s 31-yard field goal converted attempt.

At 12:57 in the third quarter, Barkley connected with Woods for a 28-yard touchdown pass and reception; this made the score 34-12. Game over, correct? No. Arizona did its best to compete until the end. With less than five minutes left and within a span of a little over three minutes, the Wildcats recorded two rushing touchdowns behind the efforts of Ka’Deem Carey. After three quarters, USC led 34-27.

Barkley also got into the mix with a rushing touchdown of his own at 14:39 in the fourth quarter after a one-yard rush to the left of the field. The Trojans and Wildcats really did fight until the end, as they exchanged two scores each in the final period.

Nick Foles’ passing touchdown to Austin Hill with one minute left was the last score the game would see. Foles finished the match with 425 passing yards on 41-of-53 attempts, including four touchdowns and two interceptions. Carey posted 34 rushing yards on 12 carries and two scores, while Keola Antolin registered 87 yards on 15 carries.

For USC, Curtis McNeal’s seven rushes led to 74 yards and one touchdown. Marc Tyler, arguably USC’s most talented running back, collected 35 yards on 11 rushes. The other two USC players to have receiving touchdowns were Marqise Lee and Xavier Grimble. Lee recorded eight catches and 144 receiving yards.

The Trojans next face the California Bears in San Francisco on Thursday, Oct. 13, at 6 p.m.

The Bruins suffered a 45-19 defeat against conference foe Stanford, but UCLA could have had that game. With the loss, UCLA is now 2-3 overall and 1-1 in conference action. Stanford, on the other hand, improved to 4-0 and 2-0, respectively. Currently, the Cardinal is ranked seventh in the nation in the AP 25 while coming it at fourth in USA Today.

UCLA quarterback Richard Brehaut acknowledges that the Cardinal is an intense and prolific team.

“Yeah, that’s the best team we’ve played as far as physicality and getting after us,” Brehaut points out.

Brehaut finished with 202 passing yards on 18 completions in 33 attempts. He threw for two touchdowns and was sacked once. On the running end, Johnathan Franklin led the group in rushing with 96 yards on 12 carries. Josh Smith had UCLA’s lone rushing touchdown.

“We’re going to look at film and kick ourselves on so many things we left out there against a very good defense,” UCLA head coach Rick Neuheisel states.

On the other side of the ball, Stanford’s quarterback Andrew Luck collected 227 passing yards and three touchdowns. Luck also had a wonderful catch. He is the projected No. 1 pick in next year’s NFL Draft.

“There’s about five positions the guy can play,” Stanford head coach David Shaw confesses. “We kind of like what he does at quarterback.”

About his catch, Luck sounds humble.

“I’m sure it was incomplete at the next level,” he says. “Glad we’re playing with the one-foot-in rule.”

The Bruins host the visiting Washington State Cougars on Saturday, Oct. 8, at the Rose Bowl at 7:30 p.m.