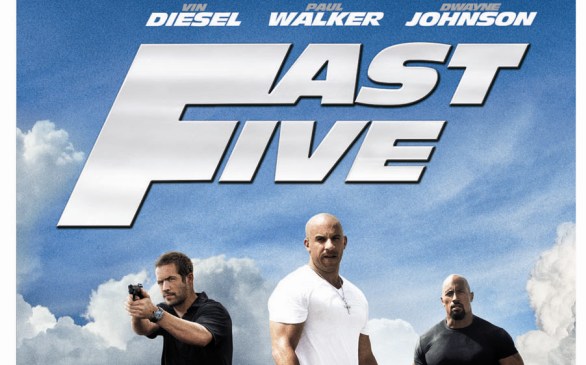 Fast Five ups the ante for the long-running franchise with the highest-octane entry yet. Dwayne Johnson joins the cast as a federal agent hot on the trail of Vin Diesel and Paul Walker’s street racing heist team in Rio de Janeiro.

The original, surviving cast reunites with director Wes Craven for Scre4m. Now a successful author, Sidney Prescott returns to Woodsboro only to spark the reappearance of Ghostface. A crop of young stars joins the imperiled, including Hayden Panettiere, Emma Roberts and Kristen Bell.

A woman (Mira Sorvino) travels to a secluded cabin only to become the object of obsession for a spirit there. When her boyfriend shows up, things get freaky in The Presence.

A shy middle-schooler with a strange birthmark travels back in time hundreds of years to become humanity’s only hope in a war against demons in the visually stunning anime film, Legend of the Millennium Dragon.

Available online through the Warner Archives: one of legendary director Akira Kurosawa’s final films, Dreams, is a beautiful series of vignettes based on the director’s actual dreams concerning man and his environment. Martin Scorsese plays Vincent Van Gogh!

Paul Mazursky captured the birth of the New Hollywood while paying homage to the European New Wave that spawned it in the comedy Alex in Wonderland, starring Donald Sutherland.

From one of the demented minds behind “The Mighty Boosh,” Richard Ayoade, comes Submarine, a fresh take on the coming-of-age tale, in which Oliver Tate (Craig Roberts) sets out to lose his virginity and reunite his parents (Noah Taylor and Sally Hawkins).

Dr. Paul Weston’s own hang-ups (a recent divorce, the possible onset of Parkinson’s) threaten to overcome his ability to help other people in the HBO psychotherapy drama In Treatment: The Complete Third Season. Each episode is an intense session with one of Paul’s clients, plus his own visits to his new therapist, played by the versatile Amy Ryan.

A Chicago cop and a schoolteacher meet at Overeaters Anonymous and fall for each other in the new sitcom Mike & Molly: The Complete First Season.

Jason Priestley returns to TV as an unscrupulous car salesman in Call Me Fitz: The Complete First Season.

An inspiring and compelling documentary, Buck follows Buck Brannaman, the inspiration for The Horse Whisperer, a cowboy who overcame an abusive childhood to travel the country transforming horses and people with his sage wisdom.

Go inside the fiercely competitive world of Irish dancing as thousands of fleet-footed hoofers descend on Glasgow for the 40th Irish Dancing World Championships in Jig.

Eye of the Future aims to galvanize younger generations to lead the charge in battling climate change by showing real-world solutions from around the globe, from nitrified soil to rooftop gardens.

Two Tim Burton favorites come to Blu-ray, his directorial debut, Pee-Wee’s Big Adventure, features commentary by Paul Reubens and Burton, and Charlie and the Chocolate Factory, the director’s bold reimagining of the Roald Dahl classic, which is loaded with extras, including a documentary on Dahl.