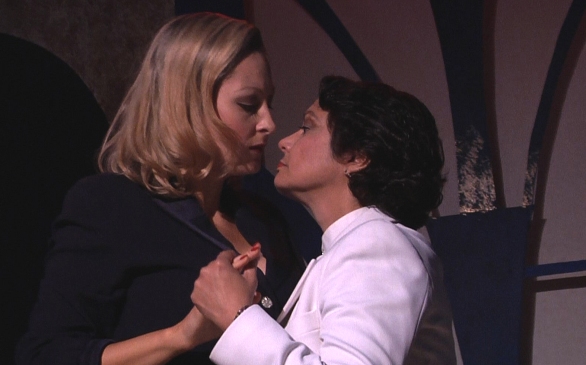 Celebrating its 10th year with the Macha Theatre Group, “Garbo’s Cuban Lover” opened with a strong performance. A depiction of the life of screenwriter Mercedes de Acosta, the play follows a story of obsession and rejection set in the grandeur of the classic Hollywood era.

With passion and vigor, playwright Odalys Nanin provides an impressive portrayal of the spicy and well-written Latina heroine her show calls for. Sucking the viewer back into the golden age of cinema with the sights, sounds and politics of big studio life in the 1940s, de Acosta’s struggle is a seemingly epic journey of triumph, lust and heartbreak. For any who understand the sting of facing an unrequited love, Nanin’s performance as de Acosta is one to empathize with.

Opposite Nanin is de Acosta’s fleeting love interest, the great Greta Garbo, played by Lina Hall. Hall nails the film star’s Swedish accent as she serves to perpetually tease the tormented protagonist. The exchange between the two is often affectionate and often comical, but more than anything it is a powerful attraction that comes to life on stage and stays with the audience, even after the show has ended.

Aside from the overwhelming romance between the show’s two leads, “Garbo’s Cuban Lover” jumps from the stage with a number of unexpected characters who serve to move the show along. Fans of film noir will receive a surprise when meeting de Acosta’s fast-talking MGM film producer.

But perhaps more entertaining is the use of Erin Holt, who plays Isabela, de Acosta’s muse, as the whimsical and ferry-like prop master who gracefully rearranges set pieces, making a show out of a task that is normally kept hidden.

With little surprises like these that add to the pre-existing intensity afforded by the story of “Garbo’s Cuban Lover,” it seems as though for its 10th year in a row, the Macha Theatre is on to something good.