Lindy Booth: Learns What it Means to Cry Wolf 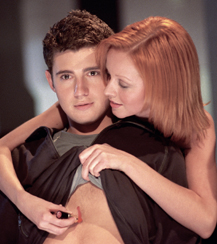 Lindy Booth has acted in quite a few horror films lately, most notably last year’s breakout remake of Dawn of the Dead. She remarks, though, that her new movie, Cry Wolf, is unusual from the rest.

"It’s on such a different level from most horror films," she says. "You have no idea what’s going on. I thought I had it all figured out. It surprised me. It’s totally, totally terrifying."

Shot in Richmond, Va., Cry Wolf is about a group of high school students who decide to play a devilish trick on the rest of their classmates. After a woman is found murdered, the group creates a serial killer profile via instant messenger and determines whom he is going to murder next. They wonder if anyone can figure out the lies, but soon enough the people they describe start turning up dead. It’s up to them to figure out what’s going on before it’s too late.

Booth, who plays one of the students, says the killer is a unique villain because the film’s characters create him. The students pick what they think are the most terrifying aspects of a serial killer and apply them to him.

"He’s scarier than most because he’s their worst nightmare," she says. "They thought of him themselves. I can’t imagine a worse bad guy."

The cast of Cry Wolf is rounded out by Jared Padalecki (House of Wax), British actor Julian Morris, and rock icon Jon Bon Jovi, who plays a teacher. Booth says Bon Jovi was a real treat to work with.

"He’s such a pro and such a rock star," she says. "But when he gets on the set, he’s a professional actor. He’s done lots of work before. He takes it seriously. And also, he’s just a really good guy."

Booth confesses that it was quite fun telling people that Bon Jovi was going to be in the film.

"I told my mom and my girlfriends about it and they all screamed," she says with a laugh. "Everyone was so excited."

Booth says the production was greatly enhanced by the young Wadlow, who brought with him a huge sense of excitement.

"He put so much heart and soul into the project," she says. "He had so much passion. We knew we had done a great take when he just screamed, ‘Cut!’ He had a youthful appreciation for the entire project. It was great."

At 26 years old, Booth displays a great sense of maturity in her interactions with other workers on set. She compliments the cast and crew at every turn and makes a point to be polite to everyone. For the latter, she attributes her actions to another actress. "I worked with Tia Carrere for a long time and she taught me how to be a gracious actress on the set; to know everyone by name, say hello to everyone."

In terms of the genre, Booth says she’s done a lot of horror lately because she enjoys the difficult nature of the work.

"It’s a lot of fun as an actor to go into that place," she says. "Emotions are so heightened. It’s so much fun, so challenging."

The Canadian-born actress has also appeared in the science fiction genre on TV, most recently in the current USA Network hit "The 4400." She says that she likes working in both film and TV and just wants to keep performing to the best of her abilities.

"There used to be a big snobbery about film versus TV," she admits. "Now some of the TV shows are better than most of the films out there. Every actor’s dream is to do good work. I’d love to do more TV, but I’d also love to keep working in film. I just want to keep working and do good work."