The Human Centipede 2 (Full Sequence): Ashlynn Yennie is back for seconds. 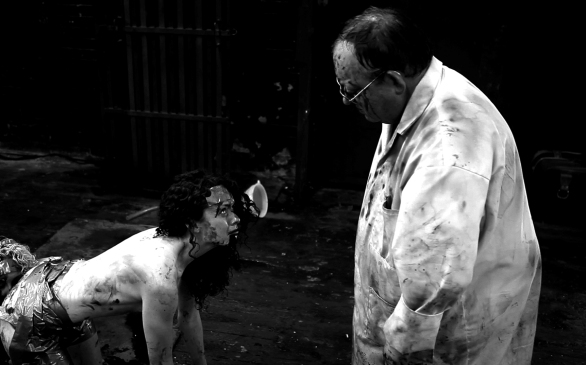 Every once in a while, a film so shocking comes out that it causes a collective jaw drop, some in extreme amazement and in many cases in revolt – or maybe even both. For this generation, The Human Centipede definitely takes the cake. Now it’s back for seconds. Dutch filmmaker Tom Six, responsible for the concept and its execution, remarks, “When I was writing the first part, I had so many ideas that I couldn’t put in the first sequence … That one played out on the psychological level, you didn’t see much. A lot of what was happening was in the viewer’s mind. For Part Two, I wanted to show everything you couldn’t see in Part One.”

“It’s a surreal thing. I can only watch the films so many times before I put a cap on it. The first one, I think I saw altogether four times. And this one I’ve seen twice now, and I think I’m good. It’s really, you know, gross. I can’t handle it,” says Ashlynn Yennie, the bubbly and sweet-spoken actress who starred in The Human Centipede (First Sequence) and is now playing herself, the starlet, in the sequel.

The Human Centipede 2 (Full Sequence) opens with Martin (Laurence R. Harvey), a mentally disturbed security guard who obsessively watches a DVD of the first Human Centipede film at the parking lot office where he works. The audience later learns that Martin plans to follow his fictitious idol’s steps, Dr. Heiter, to make a human centipede of his own.

However, he lacks the surgical skill, medical instruments or even the information that you have to wash your hands before cutting open your victims so they don’t die of infection before you successfully stitch them together. What he lacks in common sense, he makes up for in scrappy PR skills, being able to get one of the lead actresses from The Human Centipede, to star in his very own creation.

“I was living in New York at the time,” recalls Yennie, of when she auditioned for The Human Centipede (First Sequence). “I just got out of film school. I didn’t know what I was doing. I was doing commercials and all that stuff. Then my manager asked me if I wanted to shoot for a controversial European film. And when you’re 22 you’re like, ‘Yeah, a controversial European film, that sounds awesome!”

“So I went to the audition not knowing that it was a horror film, not knowing what it was about really,” Yennie continues. “[When I found out] I was like, ‘This can’t be real.’ I can’t actually describe what was going through in my mind at that time, but it seemed like an awesome idea and I remember having to explain it to my mom over and over again. She never got it until she finally saw a poster and a picture from the first one!”

From being the last segment of the centipede in the first film, Yennie’s now at the helm of not four, not six, but a stapled row of 10 very unfortunate people. Martin was aiming for 12, but you know, with a pretend doctor in a movie as your only source, crap happens, figuratively and literally.

“It’s so much better. I got upgraded so much! You’re in the front, and somebody’s back there. You’re carrying the weight of everybody, but it was fun ... I say [as my character] in the film that I demand it in my contract to get massages. In the first movie Tom and Ilona [Six, producer] were very sweet saying, ‘We have massages for all of you guys.’ During the second one it was like, ‘No massages. You guys have to stick through it.’ So we were like ‘OK fine,’” the actress laughs.

The film isn’t for everyone. The concept alone is hard to grasp for many, but in today’s shock-craving culture, it will sure find its way to a receptive audience.

Yennie says, “The reaction is very mixed. I think people are taking it too seriously a little bit. What he [Tom Six] was trying to do was again up himself one more notch than he did the first time. When we were filming, I told Tom, ‘I don’t think people are going to be ready for this. This is scary, really just disturbing.’ And when they showed me the final product I was like, wow.”

Having seen the film, this writer can say the same thing. Wow. Just wow.