Blink-182: Reunited and Ready for the Long Haul 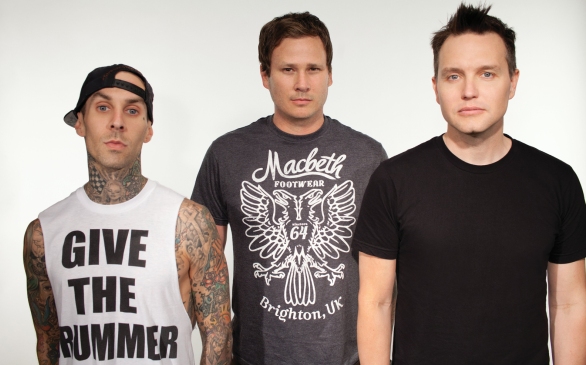 Patience is finally paying off for Blink-182 fans, who have been waiting – and waiting – for new music from the pop-punk rockers. The long-dormant band – frontman Tom DeLonge, bassist Mark Hoppus and drummer Travis Barker – resurfaced at the 2009 Grammy Awards, reuniting on stage to present an award. Fans were giddy about seeing the fellows again (They hadn’t released a studio album since 2003’s self-titled effort.) and even giddier about what they had to say.

“We decided we’re going to play music together again,” DeLonge told the Grammy audience, going on to hint at an album and tour for summer 2009.

Now, more than two years later, fans finally have an opportunity to check out all the new things Blink-182 has been up to. The band is touring with My Chemical Romance as part of the Honda Civic Tour. Blink-182’s new album, Neighborhoods, just hit stores on Sept. 26.

Getting comfortable again as friends and band mates was part of what took so long for this reunion effort to happen, Hoppus says. “I think it took awhile to get to that point,” he says. “I think it took, first of all, reconnecting as friends after not having spoken for about five years. And then it took getting back into the studio as well as getting back out on the road.”

Adds DeLonge: “It definitely took time for us to kind of put all of these different pieces back together to run the business appropriately.”

When the band hits the stage, fans will get a good mix of the new stuff from Neighborhoods and the songs that helped make Blink-182 famous, Hoppus says.

“I think that all of us know that when people come to a Blink show they’re going to want to hear ‘All the Small Things’ and ‘The Rock Show’ and ‘Stay Together for the Kids’ and the singles we’ve had over the years,” Hoppus says.

Being back together has reminded DeLonge what made him want to start the band in the first place.

“I remember the very first time we played the songs when we got back together, and it made me feel exactly the same way I feel the hour before I go on stage,” he says. “It makes me feel the way I felt when I started played guitar and my whole reason for wanting to break out of suburbia and go do something bigger.”

“Blink will last as long as we enjoy what we’re doing, and recording this album has been a lot of fun,” he says. “I think there’s something in the madness and in the creative process between the three of us that can be so frustrating at times, but it can also be a massive joy. And somewhere in that tension I think is where the good work from Blink-182 gets done. So I can see us lasting for many years.”