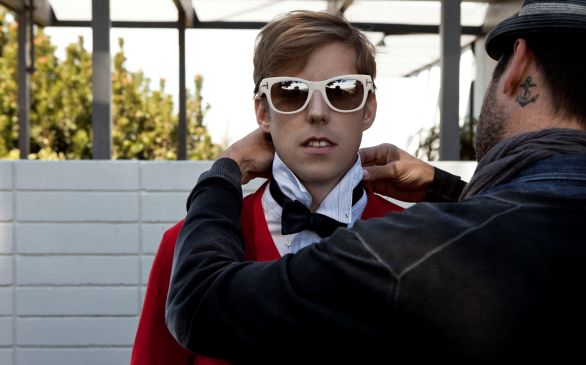 It’s no secret that Jack’s Mannequin frontman Andrew McMahon has leukemia and that his medical condition contributed significantly to the tenor of the last Jack’s album, The Glass Passenger. People and Things is also informed by McMahon’s battle with cancer but in a back-to-business way; “My Racing Thoughts” is positive and soaring, and you can imagine that this is exactly the way McMahon wished he could be while undergoing treatment. You can read all kinds of things into song titles like “Release Me” and its lyric of “take another piece of me,” but the truth is McMahon has moved on and listeners need to also.

“Release Me” has a joyous buoyancy that mirrors the Toto hit “Hold the Line,” while “Television,” also upbeat, deals with the relatively mundane subject of distracting oneself from bedtime loneliness by sleeping with the TV on. McMahon’s current attitude is probably best summed-up with the mid-tempo piano and violin number “Hey Hey Hey (We’re All Gonna Die.)” Considering McMahon’s recent past you wouldn’t expect him to come up with such a title but the song is, surprisingly, a sing-along that like the rest of the album is more a celebration than it is a dirge.

People and Things is currently available.