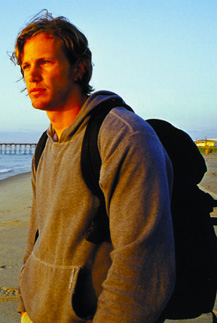 Reel Talk with Stephen Farber – which is now based at Landmark’s NuWilshire Theatre in West Los Angeles – begins its fall season on Sept. 12 with a special screening of Loggerheads.

Based on a true story, the film tells the tale of three very different people who are, coincidentally, all linked by one familiar truth. Each forms one corner of a North Carolina-based adoption triangle. There’s Grace (Bonnie Hunt), an airport car rental agent who, after giving up her baby when she was a teenager, is now attempting to push through legal red tape to try and find him; Mark (Kip Pardue), a young man obsessed with saving loggerhead sea turtles who is befriended by a motel owner with lots of old secrets; and a minister’s wife (Tess Harper) who is trying to confront her husband (Chris Sarandon) about the estrangement from their son. All these delicate stories come together leading up to a Mother’s Day weekend, and inexplicably become interwoven into one beautiful story.

Loggerheads opens in limited release Oct. 14, however, following the Sept. 12 screening, Farber – the film critic for Movieline’s Hollywood Life magazine and frequent contributor to both the Los Angeles Times and New York Times – will host a special Q&A session with actress Harper and director Kirkman. Tickets are $17 for individual screenings, and full-season passes (which include 12 screenings) can be purchased for $160.

NuWilshire Theatre is located at 1314 Wilshire Blvd., in Santa Monica. The screening begins promptly at 7 p.m. For more information on the series or upcoming films, visit www.landmarktheatres.com.