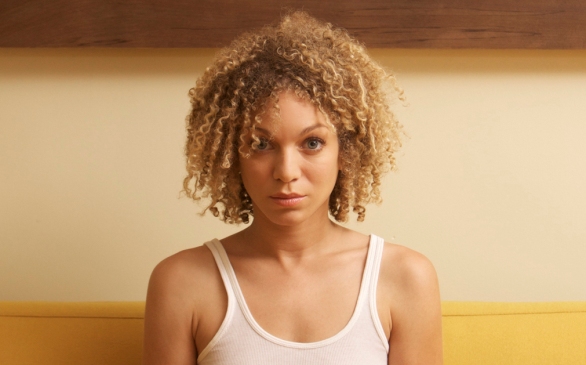 You were probably taught as a child not to “cry wolf,” but now as an adult you can feel free to cry “Wolf” all you want in celebration of the impending release of Fay Wolf’s Spiders album. Some have compared the L.A.-based singer’s style to that of Ani DiFranco, and Wolf herself describes her work as “sad song funny joke music.”

But it’s likely that you already have an idea of what Spiders sounds like since Wolf’s music has recently been featured on lots of television shows including “Covert Affairs,” “Pretty Little Liars” and “Grey’s Anatomy.” Similarly, as an actress Wolf has many appearances on popular shows under her belt but you would never guess that she’s also a professional organizer who owns a company called New Order (yes, named after the influential English synth-pop band.) So if you need a few tips on straightening out your space try to corner Wolf after her Nov. 3 show at Hotel Café; Spiders drops a few days later on Nov. 8.

Murder in the Front Row

Bazillion Points Books has announced a December release for Murder in the Front Row: Shots from the Bay Area Thrash Metal Epicenter, a large-format 272-page hardcover sure to thrill fans of the early thrash-metal era. The book contains over 400 color and black-and-white photos of acts like Metallica, Slayer, Megadeth and Exodus that were shot in the early ’80s by photographers Harald Oimoen and Brian Lew in Bay Area nightclubs like the Old Waldorf, the Stone and Ruthie’s Inn.

Death Angel, Testament, Legacy, Possessed and Vio-lence are among the many other groups featured in this early thrash scene time capsule. Gary Holt of Exodus, Robb Flynn of Machine Head and Alex Skolnick of Testament are among those contributing personal accounts, and if you pre-order now your book will come with an exclusive limited edition two-sided poster-size dust jacket. murderinthefrontrow.com.

On the eve of the release of his Back to New York City album, the prolific (more than 20 albums so far) and slightly menacing looking (300 pounds, shaved head, lots of tattoos) blues-rocker Popa Chubby has a bit to say.

“If there’s one thing I want people to know about me it’s that I’m a survivor. My dad died when I was 7; I was abandoned and raised myself. I moved to New York City at 18 and started playing music, but I got a huge heroin habit and ended up strung out on the streets. When I got away from drugs, I never went back; I got into the New York blues scene of the early ’90s, and here I am today.”

The guitarist cites the Stooges, Motörhead, Buddy Guy, Muddy Waters, Stevie Ray Vaughn and Robert Johnson as some of the influences audible on Back to New York City. Popa believes the work to be a “career album;” find out if you agree when it drops on Oct. 11.

For the first time in over 10 years, the two complete seasons of “The Monkees” television show are available on DVD. Eagle Rock Entertainment has just released two separate DVD boxed sets. The Monkees Season No. 1 contains 32 half-hour episodes from 1966 along with bonus features like commentary from the band and the show’s directors, trivia for each episode, a 16mm version of the original pilot and vintage Monkees Kelloggs commercials. The Monkees Season No. 2 presents 26 episodes from 1967 and bonus material; the show won an Emmy Award for this season. “I’m a Believer,” “Daydream Believer,” “(I’m Not Your) Steppin’ Stone,” “Last Train to Clarksville” and “Pleasant Valley Sunday” are some of the big hits that the Monkees had during their brief television career, and performances of all can be found on various episodes throughout the sets.

Throwdown will headline the first annual Brawloween Tour, a brief 11-date tour of California, Arizona and Nevada. Carnifex, First Blood and Suffokate will also be on the bill when the Brawloween Tour makes local stops at Chain Reaction on Oct. 23 and at Cobalt Café on Halloween.