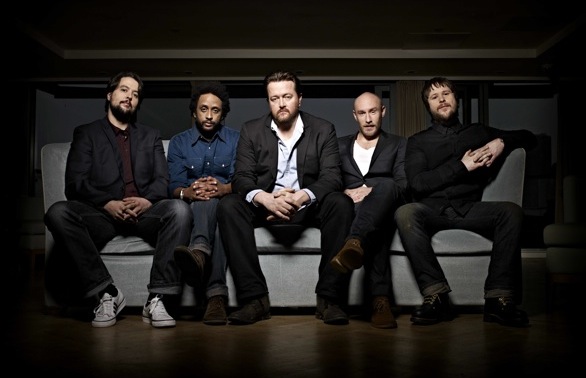 It’s a crime that Elbow isn’t as huge in the states as they are in their native England. All of their albums have made the Top 20 in the UK, their 2008 album, The Seldom Seen Kid, won the Mercury Prize and after Saturday night’s show, it’s confirmed that they are one of the best live acts around. Opening with “The Birds” from their latest effort, Build a Rocket Boys! (nominated for the Mercury this year), the band immediately captured the crowd with Pete Turner’s pulsating bassline and frontman Guy Garvey’s beautifully hypnotic voice.

They continued to delight with Mark Potter’s catchy guitar riffs, Richard Jupp’s frenetic drums and Craig “Sexy” (his nickname for the night as dubbed by a loud female fan overheard by Garvey) Potter on keyboards on numerous tracks off 2006’s Leaders of the Free World (“Great Expectations,” “Puncture Repair,” “Station Approach”) and The Seldom Seen Kid (“The Bones of You,” “Mirrorball”).

There was no doubt that Garvey is as charismatic as he is talented, leading a venue-wide sing-along that turned into the “whoa-oh-ohs” of “Grounds for Divorce,” waving his arms with the audience to “The Loneliness of a Tower Crane Driver” and making funny quips like: “You’re trying to have a fully emotive moment only to have a piece of confetti from last night’s band waft into your face, reminding you that you just don’t have the same production value of say, Muse” before rocketing into “Neat Little Rows.”

The band gathered around Potter’s keyboard for a round of shots to celebrate its 20 years together with the entire crowd singing “Happy Birthday,” then Garvey reached “dolphin-like” sonic heights with the repeated “are we having the time of our lives” kicking off “Weather to Fly.” They created more magically memorable moments with “The Night Will Always Win," "The River” and “Lippy Kids” before closing the set with “Open Arms.”

Elbow returned to the stage with trumpets literally blaring for “Starlings” and ended the night in the most beautiful way, with “One Day Like This.”