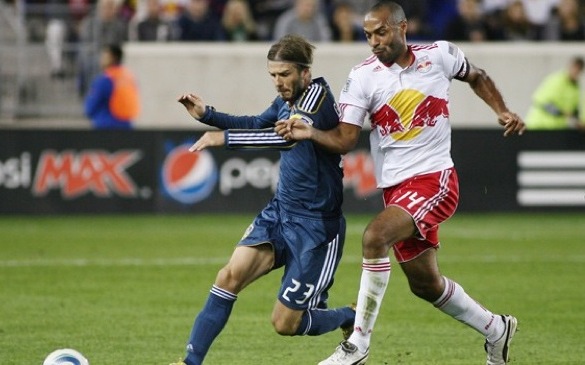 David Beckham of the Galaxy battles for the ball with Thierry Henry of the Red Bulls.
(Credit: lagalaxy.com)
The Los Angeles Galaxy finally made their East Coast trip to New York Oct. 4 to play a game that was postponed due to drastic weather weeks ago. However, the result was not that favorable after a 2-0 loss to the Red Bulls at Red Bull Arena in Harrison, N.J. in front of over 25,000 fans.

“It wasn’t our best night, I think we looked like a tired team. Tonight is a culmination of a lot of games over a short period of time, and it showed,” Galaxy head coach Bruce Arena says after the rival coast showdown.

With the loss, Los Angeles suffered its fourth defeat of the season. They are now 18-4-10, have the best record in Major League Soccer and have already clinched this year’s MLS Supporters’ Shield. By winning the Supporters’ Shield, the Galaxy have clinched home-field advantage throughout the 2011 MLS Cup Playoffs, which was one of their goals coming into this year’s campaign.

Mike Magee and Landon Donovan did not make the trip and did not play.

New York’s Luke Rodgers began the scoring in the 32nd minute on an unassisted score for his ninth goal of the year. Rodgers showed he was glad he nailed the eventual game-winner on such a good Galaxy squad.

“Getting that score there against the top in the league, that’s really good. This is a massive confidence boost for us; I think this is the best we have played for a long time, you know probably from the start of the season,” Rodgers says. “It’s just a massive confidence boost, everyone looks so happy in the dressing room and that’s what we should be doing. We know we can beat any team in the league; obviously proving it is a different thing. I think tonight we worked together as a team, and we were the best team.”

Both teams headed to their respective locker rooms with the scoreboard reading 1-0 in favor of the Red Bulls. In the 60th minute, however, that changed when defender Rafael Márquez assisted on forward Thierry Henry’s 15th goal of the season. The score was 2-0, and it remained that way until the end.

“I thought the team played well, and that was the most important thing. We worked hard. Sometimes we are at the end of some movement and we try to score goals, but I’d rather talk about the way we all played as a team today,” Henry says.

New York’s head coach Hans Backe liked the team’s performance, especially since they progressed as the game went on.

“We played well. I would say we had an even start, but we were just getting better and better throughout the 90 minutes. The first 15 to 20 minutes were tight, but I think after that we got better and better with rhythm and with our passing game,” he states. “We had some unfortunate errors in the beginning, perhaps we were a little bit nervous, but after 15 to 20 minutes, we looked much, much better.”

The Galaxy’s David Beckham shared his thoughts on the team’s display on the pitch and their long trip to the East Coast.

“I think every time we come here, we expect a fight because the Red Bulls is a team that the majority of the time will battle. We knew, obviously, the position they were in, they needed to win the game,” Beckham depicts. “We knew that they were going to battle tonight, and they did. At the end of the day, they out-battled us. I think they sat back a lot, but like I said they have quick players that can hit you on the break and they did that.”

Now, the Galaxy has two games remaining during this 2011 season. Their home finale is on Sunday, Oct. 16, at 6 p.m. at the Home Depot Center in Carson against Chivas USA. It will be another classic tale of the two rival squads that share the same city and venue. The Galaxy won the first match when they faced each other in May by a score of 1-0.