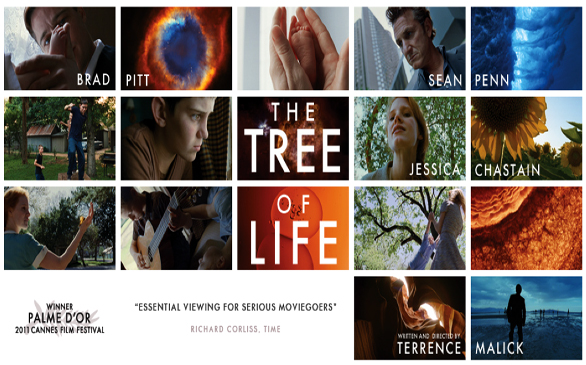 Living legend Terrence Malick’s latest may be his most ambitious film yet. Spanning the entire history of the planet, The Tree of Life hones in on a 1950s Midwestern family living under a tyrannical patriarch (Brad Pitt). It’s a powerful meditation on psychic scars and the complicated love-hate relationship between fathers and sons.

The Honeymooners: Lost Episodes 1951-1957 is a massive 15-disc set compiling some of the earliest sketches of Jackie Gleason’s classic married couple, many of which have gone unseen since their original live broadcast.

Tim Roth returns for a final season as a psychologist brought in by law enforcement to crack the toughest cases by determining when someone is lying in Lie to Me: Season Three.

British comedy stars and real-life friends Steve Coogan and Rob Brydon make for a hilariously mismatched pair of traveling companions in The Trip. The duo tours the English countryside reviewing fine restaurants while trying not to kill each other. Michael Winterbottom directs.

Jason Bateman, Charlie Day and Jason Sudeikis enter a pact to kill the superiors who are making their lives hell in Horrible Bosses. Kevin Spacey, Jennifer Aniston and a goofier-than-you’ve-ever-seen-him Colin Farrell chew the scenery as the titular employers.

Kevin James stars as an awkward but lovable zoo employee who starts taking romantic advice from the talking animals (voiced by Adam Sandler, Sylvester Stallone and Cher) in Zookeeper.

One of the most iconic characters of the last 25 years returns to the stage in his comeback special The Pee-Wee Herman Show on Broadway.

Also available: Bette Midler: The Showgirl Must Go On

Ben Harper narrates White Wash, a documentary bringing the focus away from the stereotypical surfer dude image and toward African Americans’ contributions to the sport.

In the late ’50s to early ’60s, the Master of Suspense directed a string of the greatest films ever made. Just in time for Halloween, Rear Window, Vertigo, Psycho and The Birds are available in one extras-laden set, Alfred Hitchcock: The Essentials Collection.

Jennifer Jason Leigh and Stephen Baldwin star in the adaptation of the classic novel Last Exit to Brooklyn.

Also available: Rhys Ifans in Mr. Nice, Maria Bello in Beautiful Boy, Submarino by the director of The Celebration

A trailblazer of the creepy kid genre, The Bad Seed comes to Blu-ray. Mervyn LeRoy directs the tale of a loving housewife who begins to suspect her 8-year-old daughter may be a murderous sociopath. Rhoda herself (Patty McCormack) provides commentary.