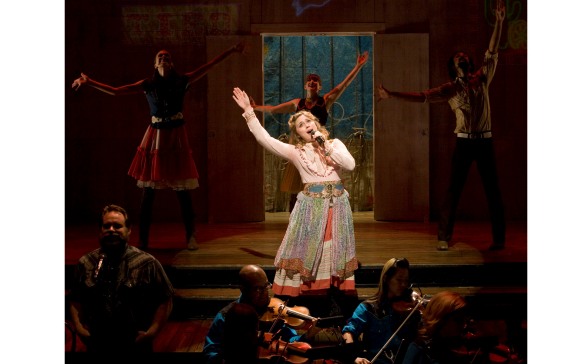 The world premiere production of the Rude Mechs’ “I’ve Never Been So Happy” is part of DouglasPlus, presented by Center Theatre Group. DouglasPlus “is an eclectic mix of theatre choices, ranging from full-staged or minimally-staged events to workshops and readings that utilize both traditional and non-traditional performances.”

From the moment you walk into the lobby of Kirk Douglas Theatre, you set foot into country-western chaos. There is a cantina lounge to your left, a photo booth to your right, makeshift shacks everywhere, hay stacks and a saddle just sitting there waiting to be straddled.

The story is about two star-crossed lovers. Annabellee (Meg Sullivan) is desperate to get away from working on her father’s “Country and Western Comedy Variety Hour” show. He won’t allow her to leave showbiz until the day she gets married. Annabellee’s confidents are her two Dachshunds dogs, Sigmunda (Jenny Larson) and Sigfried (Paul Soileau).

Jeremy (E. Jason Liebrecht) doesn’t exactly have it good either. His mother Julie (Cami Alys) joins an all-woman commune and ties her son to a mountain lion in the hopes that this will make him a stronger, tougher man.

Although the plot was silly and a bit difficult to follow, the cast was full of superbly talented singers determined to make the audience have a great time. There was also cheesy dancing, animation, bad jokes and German accents. If you enjoy musical theater, I recommend checking out this performance.