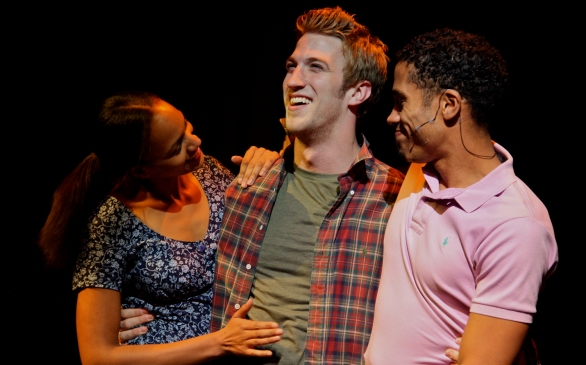 Fans of the Broadway mega-hit “Rent” will no doubt be enticed by this autobiographical musical from creator Jonathon Larson. Doma Theatre Company’s production of “tick…tick…BOOM!” portrays a young Larson as he struggles with identity and accomplishment approaching the landmark of his 30th birthday. Pressured by the mounting need to make a name for himself, Larson’s frustrations are portrayed through the show’s main character, Jon, who is a floundering composer living in New York’s West Side. For those familiar with the sounds and setting of “Rent,” the performance may induce a few brief moments of déjà vu.

Lead John Arthur Greene exudes an enormous amount of energy as he cycles through the emotional turmoil of the show’s ambitious playwright. Juggling instances of depression, apathy and exuberance, his journey as “Jon” is exhausting yet nonetheless entertaining as Greene handles the mood swings with grace. Tony Melson, who plays the role of Michael, Jon’s childhood friend, supports Greene. Offering brief instances of comic relief, Melson adds a touch of civility that grounds Greene’s character.

Melson along with Jennifer Colby Talton, who plays opposite Greene as Susan, dance between several different characters to keep the show moving. Yet, despite the enormous contributions of Greene and Melson, it is Talton who truly holds the show together vocally. Displaying an impressive amount of range and control, Talton powers through numbers with a vocal strength that seems to keep the rest of the cast on track.

Doma Theatre’s performance is particularly impressive because of the size of its cast. Utilizing only three actors and a four-piece band, the sound produced onstage is striking, especially considering the harmonic complexities and size of range demanded by the score. You can tell when certain characters are being pushed to their vocal limit, even though any potential sonic blemishes are well masked by an overwhelming sense of professionalism.