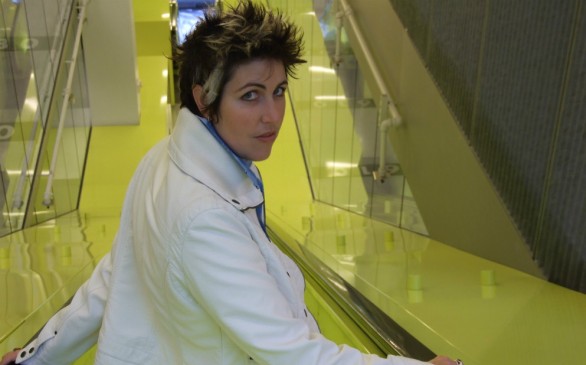 Camille Bloom: Never Out of Time

It’s kind of amusing that Camille Bloom would call her new album Never Out of Time. Time is surely at a premium for the constantly-on-the-road Seattle-based singer who plans to keep it that way for the foreseeable future; Bloom already has tour dates booked all across the country and abroad well into 2012. Once a high school teacher, Bloom also continues to find time to encourage the nation’s youth at a rock ’n’ roll camp for kids that she directs in Seattle and by making regular stops at youth centers while she’s on the road.

“I like to perform and talk to kids about using positive outlets such as music to cope with life’s struggles,” Bloom says. Recorded with her back-up band the Recovery, Never Out of Time also bubbles with positivity as it rocks out, and you can get in on the good vibes when you make the time to catch Bloom’s show at Genghis Cohen on Oct. 19. Never Out of Time drops on Nov. 8.

Uh Huh Her: A Kiss is Just a Kiss

Leisha Hailey of Los Angeles-based duo Uh Huh Her was removed from a Southwest Airlines flight in late September after sharing a kiss with her same-sex partner. Hailey apparently got verbally upset when a flight attendant who saw the display of affection informed her that “Southwest Airlines was a family-oriented airline” and that the kissing had to stop.

Hailey posted a statement on the Uh Huh Her Web site saying, in part, “We have always promoted tolerance, openness and equality both as a band and as individuals, and we believe everyone has the right to live openly in this society as equals. We want to make it clear we were not making out or creating any kind of spectacle of ourselves – it was one modest kiss. No matter how quietly homophobia is whispered, it doesn’t make it any less loud. You can’t whisper hate. We ask this airline to teach their employees to not discriminate against any couple, ever, regardless of their own beliefs.”

At press time, Hailey was asking the airline for an apology and a refund.

Disturbed’s last album, Asylum, was their fourth consecutive studio album to debut on the charts at No. 1, a feat that’s only been accomplished by two other rock acts: Metallica and the Dave Matthews Band. Now the guys have culled a bunch of B-sides and one-off tracks from their archives to be released as The Lost Children.

The set will feature hard to find tracks like “Parasite” from the Japanese version of the Indestructible album, the West Memphis Three benefit song “3” that was previously only available digitally at the Disturbed Web site and “Mine,” a song that’s never been released before in any form. The Lost Children drops on Nov. 8.

Jamaican reggae star I Wayne has just released a new album called Life Teachings where he’s able to tackle subjects like rejecting materialism and railing against violence without taking on an unsavory tone.

“There is a preference for nastiness; positive artists don’t get their fair attention,” explains I Wayne. “But me stay calm and remember nature was going on before any business start, so it better I keep my focus and keep writing these songs.”

Midnight Red at the Hard Rock

Fresh off the road as the opening act on last summer’s New Kids on the Block/Backstreet Boys tour, the five upbeat singers and dancers of Midnight Red are happy to stay in one place for a while. The guys are in the midst of a Saturday night residency at the Hollywood Hard Rock Café with shows scheduled for Oct. 15, 22 and 29. The four-song Midnight Red digital EP is available now, and a full-length is on tap for 2012.

Los Angeles-based metal band Warbringer has played about 300 shows a year for the past three years and now all the hard work has paid off; the band has just embarked on their first nationwide headlining tour with Lazarus A.D., Landmine Marathon and Diamond Plate in tow. The tour is to support the new Warbringer album, Worlds Torn Asunder, just released by Century Media.