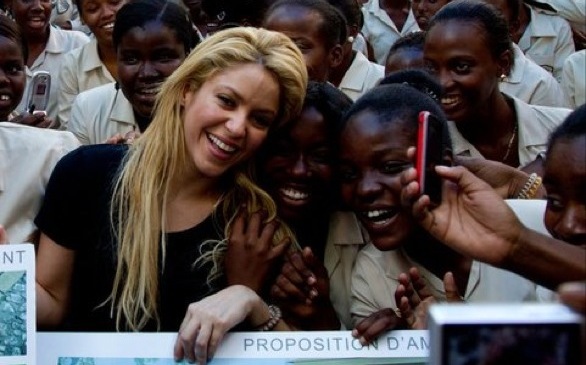 The Colombian singer has had quite a turn-around in terms of her music career, making a mark on the popular music scene. Starting out as a young girl with colorful braids and a penchant for heartfelt, quirky songs, Shakira developed into a woman with sex appeal who crafts catchy songs and has an unmistakable talent for moving her hips.

Sale el Sol marked the seventh album from the 34-year-old, but this Grammy nomination is based on the fact that she takes times out of her busy career to help others in need. Her foundation, Piez Descalzos (Barefoot), was founded back in 1997, before her big mainstream debut, and focuses on helping children get an education.

The fact that she’s receiving this nomination at all proves that the music world recognizes not only talent but other aspects of a musician’s personality that distinguish them from all the other singers on the Top 40 charts. It’s one thing to craft amazingly brain-invading tracks that get record-setting sales and amass obnoxious amounts of money. It’s another thing to use that money for the good of someone else.

Piez Descalzos has created campaigns to raise money and build a school. And although Shakira herself obviously couldn’t have been directly involved in every single aspect of the organization’s efforts, the fact that she founded it is enough to show that she cares about more than supplying her own wealth.

Her glitz and glamour persona is one of unrestricted, sensual dancing and provocative, catchy songs. But her efforts through the organization show that being a pop star doesn’t necessarily mean living the glamorous life and forgetting that there are others who are in need of basic necessities.

Whether you like her music or not, her efforts are admirable. She’s not the first nor the last musician to be charitable to those in need but to the children she helps, it doesn’t matter if she’s setting a record or not, it matters that she at least cares.

Living the life of the pop star will always include luxury and wealth, but it doesn’t take much for stars to at least give a little back to the people they don’t see at fancy parties or restaurants. It’s ordinary strangers that catapult these pop idols into fame in the first place. This is not to say that all pop stars are selfish and only self-invested, but there’s something genuine and admirable about the icons that take the time and effort to give back to people that have very little.

Shakira might not always be in the extraordinarily famous, but her philanthropic efforts are sure to keep setting her apart; the nomination itself makes this point. Regardless of whether she actually takes the prize, come November, Shakira’s efforts have at least won the love of the children who’ve benefited from her efforts.

If artists can create a clothing line or a perfume scent, they can surely put in the effort to work towards a charitable cause. The advantages celebrities have when it comes to connections, money and resources puts them in a position where they are easily able to start organizations, find the right people to help and ultimately make a difference in someone’s life.

Our generation is willing to listen to stories about people in need and celebrities are in the position where they can raise awareness quickly, making philanthropy almost fashionable. Social media networks have been used not only to promote albums but to spread the word about an issue that artists feels needs to heard by their thousands, or even millions, of fans.