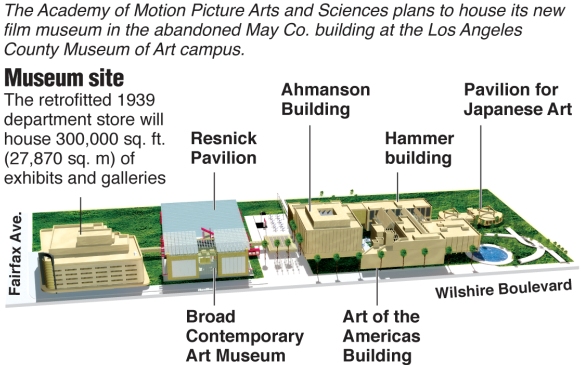 Los Angeles boasts world-class museums dedicated to art, cars and even tar pits. It may soon have an equally prominent showplace for the city’s signature industry – motion pictures. In partnership with the Los Angeles County Museum of Art, the Academy of Motion Picture Arts and Sciences says it intends to open a sprawling movie museum in as soon as three years.

The long-delayed project would be housed in an abandoned Miracle Mile department store near LACMA, the Petersen Automotive Museum and the George C. Page Museum. After abandoning plans for a $400-million fundraising drive to build the Academy Museum of Motion Pictures from the ground up on a Hollywood lot, the presenter of the Oscars now says it will lease the 1939 building at Fairfax Avenue and Wilshire Boulevard that formerly housed the May Co. and is now owned by LACMA.

The new museum, which could potentially cover 300,000 square feet, may feature exhibits tracing the history of movies, galleries focused on specific filmmaking crafts and a theater.

“Los Angeles is very hungry to build and send a message to the world that we are a center of culture,” Michael Govan, LACMA’s chief executive, says.

The academy’s quest to create a motion picture museum dates to the 1960s; its most recent push came in 2005, when it purchased 3.5 acres for about $50 million near the intersection of Vine Street and Fountain Avenue. Academy officials hired French architect Christian de Portzamparc to design a museum on the Hollywood property but said the economic downturn forced them to dump the endeavor.

Academy President Tom Sherak says that the partners will need to raise about half of what the earlier museum was budgeted to cost. Given estimates of the previous plan, that would total about $200 million. Though the partners say they hoped the museum could open its doors as early as 2014, the precise timeline will be determined by the success – or failure – of the fundraising efforts.

The pact with LACMA comes just four months after the academy hired Dawn Hudson, the former head of Film Independent, as its new executive director. Govan took the helm at LACMA five years ago and has sought to revitalize and expand the art museum. Part of his strategy has been to partner with other organizations, including the Getty Museum (the two museums recently teamed up to acquire 2,000 Robert Mapplethorpe photos) and Film Independent (which puts on the L.A. Film Festival and the Spirit Awards and is relaunching LACMA’s film series).

“We went over this building with a fine-toothed comb to make sure it could hold our dream for a premiere film museum,” Hudson says. “It’s the perfect marriage of capacity and what our dreams are for a film museum.”

She vows that the museum will be “a distillation of our mission, to show the art and craft of motion pictures.” Exactly what services LACMA will provide for the museum remain to be determined.

Hudson and Govan say the next steps include a capital campaign to retrofit the May Co. space and determining what pieces from the academy’s extensive archives will be incorporated into museum exhibits. The academy’s distinguished research library will not be relocated into the new space.

Sherak says the academy has no intention to sell its Hollywood land, though specific plans for the site, which includes a few abandoned buildings, remain unclear.

“We have committed a lot of money there to raze buildings and turn the area into something that people can use,” Sherak says. “We are going to do something academy-centric and for the community with that land.”

If the academy did decide to sell, “there would be huge interest in that piece of real estate,” says broker John Tronson of Ramsey-Shilling. “There are precious few assemblages of land that size one could acquire and build on in Hollywood.”

Developers might pay as much as $40 million for the property, he says. A likely development there would be apartments over ground floor stores, roughly equivalent in size to the W Hotel, a retail and residential complex at the intersection of Hollywood and Vine. “Hollywood is getting very strong rents,” Tronson says.

The Museum of the Moving Image in Astoria, N.Y., which opened in 1988 in an old Paramount Studios complex, now claims to have the nation’s largest and most comprehensive collection of artifacts relating to the art, history and technology of the moving image; its collection comprises some 130,000 items. Overseas, Berlin has an impressive movie museum.

“The fact that L.A., the capital of the most popular art form in the 20th century – perhaps in history – has not had a permanent, large-scale cultural venue devoted to this art form has been a real lack,” says James Sanders, a New York architect who writes about film history and has curated exhibitions on film. “This has been a missing piece in the cultural scene for decades. But making a museum – making a world-class museum – is a daunting proposition. The idea of a partnership with an incredibly well respected, adventurous and sizable art museum does make sense.”

Donelle Dadigan, the president and founder of the existing Hollywood Museum near the Hollywood and Highland shopping center, says she welcomed the partnership between LACMA and the academy.

“I believe in the theory of the more, the better,” Dadigan says of her facility, which boasts of “10,000 authentic showbiz treasures” and exhibits not only from movies but also television, radio and live theater. “I frankly look at all museums as being complementary to each other.”