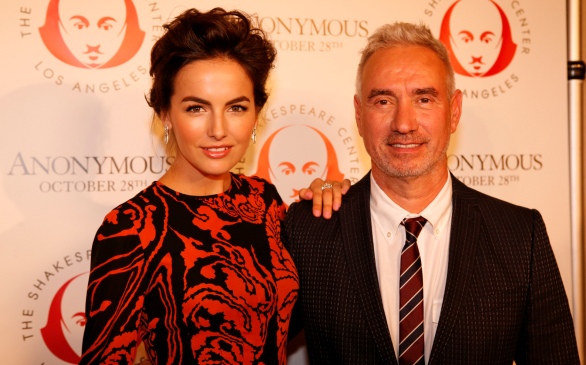 “Spreading the gift of knowledge,” was a statement heard throughout Sony Studios on the night of Oct. 11 at the Crystal Quill Awards hosted by the Shakespeare Center of Los Angeles. The phrase was associated with the screening of the upcoming controversial film Anonymous, which is rocking the literary world to the core and preceded the gala awards.

Anonymous is directed by blockbuster hitmaker Roland Emmerich (Independence Day, 2012, 10,000 BC) who was one of the Crystal Quill recipients, introduced by the glamorous Camilla Belle (10,000 BC, When a Stranger Calls). At the awards ceremony, Emmerich noted that Anonymous is one of the riskiest films he’s ever worked with. The other award recipient was entertainment attorney and author Bert Fields, introduced by an extremely energetic and charming Michael York (Austin Powers). Fields was awarded for his studies concerning the Shakespeare authorship debate, which is also the subject of Anonymous.

The film speculates on the fraud issue that has for centuries intrigued academics and great minds such as Mark Twain, Charles Dickens and Sigmund Freud as to whom actually created the body of work credited to William Shakespeare. You could feel it in Emmerich’s voice at the awards that he has created a film that could change the way we view history.

Fields stated that the Shakespeare debate is one of the world’s greatest mysteries, that he was proud to study the mystery and, along with Emmerich’s visionary direction of Anonymous, they hope to provide many concrete answers. The Shakespeare Center of Los Angeles and Sony Pictures should be applauded for paying homage to such a risky but important cause.

Special Features
Gambling Movies That Are Worth Watching
338 views