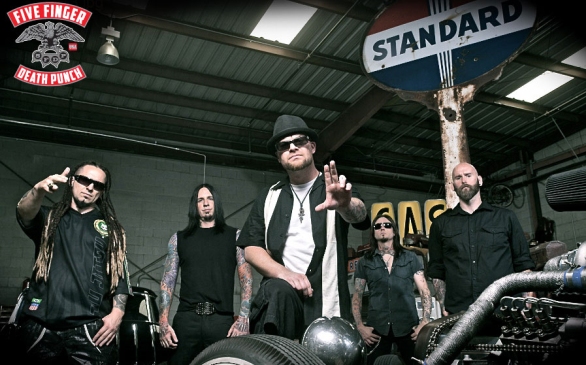 Since their debut album in the summer of 2007, they have launched world tours, and with nationwide dates currently scheduled for the fall, these hard rockers show no signs of slowing down.

Their unusual band name has been credited towards Asian martial arts cinema and B-rated spoof flicks in the past, which holds some degree of truth.

“We’ve always liked really bad kung fu movies, but the band name actually came from Kill Bill,” shares Báthory. “We were all sitting in a movie theater and heard ‘Five Finger Exploding Heart’, after that we looked at each other and thought it sounded so stupid it could actually be a band name. The ‘Exploding Heart’ part didn’t sound right, so we changed it to ‘Death Punch’ based on the legend or myth started by the Chinese about the one-punch kill in their movies.”

With their debut album, The Way of the Fist, they entered the Billboard 200 at No. 199 and they climbed 100 spots, capturing the media’s attention.

“It was pretty amazing since we were an unknown band from an indie label,” says Báthory. “All we had was word of mouth, and through the Internet, people helped us make a really big buzz. Making the Billboard 200 with a brand new band was a huge achievement, especially in this age where album sales are down. That summer, Korn gave us a spot on Family Values, which led to really great tours after that. ”

Last spring, after completing their European tour, they travelled to Iraq performing 10 shows for American troops in honor of their dedication and tireless work.

“We were playing in Germany, and this group of guys was stationed there and said, ‘we’re huge fans of the band,’ which lead to an idea of creating something for the troops since our music resonated with them,” shares Hook.

“The USO organizes bands to perform for the military, and we always wanted to go. Once our second album [War Is the Answer] came out, it included military themes which they related to,” adds Báthory. “It’s been one of the best shows of our careers. Have you ever seen a mosh pit with guys holding machine guns on their backs? It’s pretty serious. We laughed and hoped no one had grenades in the pit, or pulled a pin accidently. Nothing is more intense than seeing a colonel stage dive onto a sea of military uniforms.”

Having toured the country on Mayhem Fest and with Godsmack last year and a few European festivals, they have experienced quite a few unforgettable moments while living on the road.

“Our goal now is to avoid getting in trouble,” laughs Báthory. “Pressurized paintball guns aren’t allowed on our buses anymore. We got way out of hand with them. The ferries between Finland and Sweden are by far the best experiences. Those are the party boats that hold all our buses and last 36 hours, so you can imagine what goes on inside these boats.”

“The duty free alcohol, a bar in the front and a bar in the back, and people head back and forth all weekend long,” adds Hook. “So many crazy things happen on the road; we’re a rock band, shit happens,” says Báthory.

Fans who loved War Is the Answer will welcome the band’s latest release, American Capitalist, with open arms.

“We started writing this album in December 2010, so that’s a short gap [since] War Is the Answer,” says Hook. “I think musically, we’re the same people who did that album, and this new record could be side C or D from that record. We made a conscious decision to keep it edgier, maybe a higher percentage of aggressive material, but melodic stuff does find its way in there. If people liked War Is the Answer, this will fit in perfectly behind that record.”