Sandra Bullock vs. James Cameron: Who Comes Out on Top? 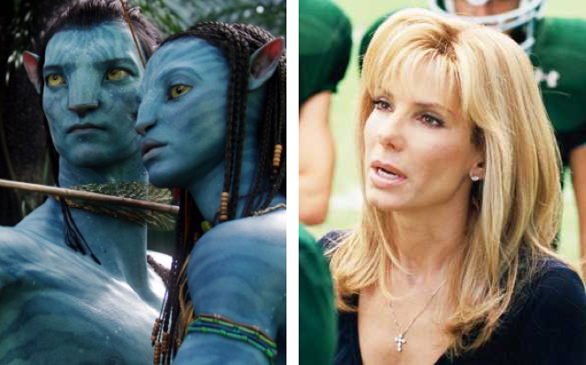 Well actually, they both do.

Netflix has been around for fourteen years and on Tuesday, they released the "Netflix Top 10 Movie Rentals of All-Time." Taking into account that no movie on the list would be older than fourteen years or so, I was still surprised at the list. It didn't include the usual fanboy/comic book/superhero/sequel/prequel/remakes (save for Iron Man) that have been inundating the box office lately.

So the surprise rental champ is...Sandra Bullock, who not only stars in the top renting film, but the top TWO renting films, The Blind Side and Crash respectively.

Here is the Netflix Top 10:

4) The Curious Case of Benjamin Button

In response to Netflix's list, today, BitTorrent released the “Top 10 Most Pirated Movies.” Surprisingly again, it also didn't include some of the usual suspects that have been inundating the box office lately. In fact, the two movies to make both lists, The Departed and Inception, are hardly aimed at the teenage fanboy that the studios have been catering to lately.

10) Pirates of the Caribbean: At World’s End

So, to answer the question, Sandra and James each come in first place.