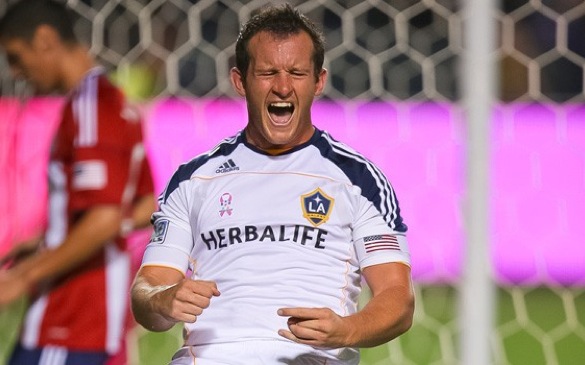 Galaxy forward Chad Barrett scored his seventh goal of the year against Chivas USA.
(Credit: lagalaxy.com)
The L.A. Galaxy closed out their home season schedule with a 1-0 victory over rival Chivas USA in the SuperClasico at the Home Depot Center in Carson before a sold-out crowd on Sunday. With the win, the Galaxy improved to 19-4-10 on the season with a total of 67 points. They have clinched home-field advantage throughout the playoffs, which could include the MLS Cup in late November. The 67 points is a league-best, as the Galaxy still remain in first place in the Western Conference and with the top record in the league.

“It was another good win for our team. I think in the first half if we were a little sharper we would have gotten a couple of goals, but that’s the way it goes,” Galaxy head coach Bruce Arena says. “In the last 10 minutes we did a good job just holding onto the lead and winning the game. Obviously a very good season at home, a good effort by our group.”

The win at their home pitch gave the Galaxy an undefeated campaign; they are the only team to do so in 2011 with an overall record of 12-0-5. Going back to the previous year, Los Angeles carries an 18-game unbeaten streak at home.

Chivas USA head coach Robin Frasier, a former Galaxy defender, was not happy with his club’s performance against the best team in the league.

“I don’t think we were good enough with the ball. As a result we turned it over and put ourselves under pressure,” Frasier confesses. “Certainly L.A. was coming at us a great deal in the first half, but I think a lot of that is attributable to the fact that we were not quite good enough with the ball. In the second half, I thought we were better. This is another game where we seem to have made a few critical mistakes at a critical time.”

For the third year in a row, the Galaxy took the L.A. bragging rights. The Galaxy earned the SuperClasico series, having won the earlier match of the season in May by a score of 1-0. For the sixth time in seven years, the Galaxy have been crowned kings of Los Angeles.

Chivas USA managed to keep the Galaxy quiet in the first half, earning a scoreless figure come halftime.

“We were disappointed when we came in at halftime and not to have scored because we had two, three, four really good chances, but you know, I think we kept our composure and we kept on playing,” English midfielder David Beckham says. “We knew that if we created chances that we’d score. So, I think, overall we created the chances, we could have three or four, but we still got the three points, which was important for us.”

But the second half was a different story when forward Chad Barrett nailed his seventh goal of the year in the 53rd minute. Forward Adam Cristman recorded his first assist of the season during the scoring transaction.

“I was getting good chances and putting myself in good spots, and I knew if I kept doing that I was going to score,” Barrett states of the goal. “I flicked the ball over to Adam, he did a great job to get the cross in, he just put it in on my head, and you can’t miss from there. All the credit goes to him on the assist, and I was just there for the tap in.”

After traveling to Honduras for a CONCACAF Champions League match on Thursday, Los Angeles finishes the 2011 MLS season on Sunday, Oct. 23, as they travel to Texas to face the Houston Dynamo. Kick-off is at 4 p.m.

“A couple of players will be coming back from injury,” Arena says. “We look forward to the game on Thursday which is certainly going to be a good one and closing out a regular season in Houston.”