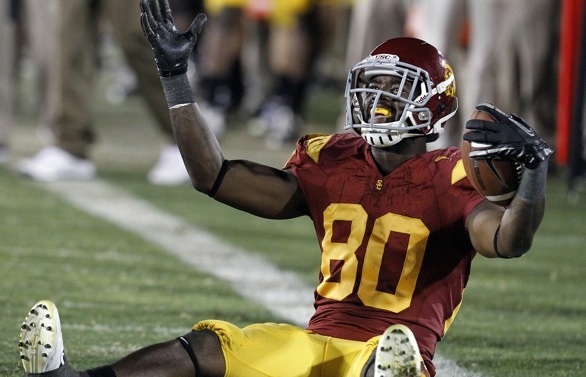 The UCLA Bruins were inactive on the football field this week, but the University of Southern California Trojans saw action in their trip north.

The Trojans made their NorCal trip with one goal in mind, and that was to come back to Los Angeles with a win on the road.

USC topped the California Golden Bears by a score of 30-9 on Thursday night. This was the eighth consecutive time that the Trojans defeated the Golden Bears. With the win, USC improved its overall mark to 5-1 and is now 3-1 in the arduous Pac-12.

As a team, the Trojans forced five turnovers against Cal (3-3, 0-3) and surrendered only one touchdown. The defense was solid.

“It was huge for us as a confidence booster,” Trojan freshman linebacker Dion Bailey, who captured two interceptions, tells multiple media outlets. “We had to come out and show everybody that we aren’t as bad a defense as everybody thinks we are. We held them to only nine points. It was huge today. We picked up our offense. Hopefully next week we’re firing on all cylinders and we’ll be dangerous.”

The scoring began with less than seven minutes to go in the first quarter when kicker Andre Heidari nailed a 39-yard field goal to give USC a 3-0 lead. The game remained even from that point on until the clock hit 7:36 in the second quarter. USC’s junior quarterback Matt Barkley connected on a well-thrown pass to Marqise Lee for a 39-yard touchdown grab. After the extra point, the score read 10-0, and the Trojans would control the tempo of the affair thereafter. At 5:13, Heidari added a 29-yard field goal. Then, nearly three minutes after, Barkley threw another touchdown; he connected with Brandon Carswell on a seven-yard score. USC led 20-0 by halftime.

USC’s defense came up big against Cal, who did not score a single point until 4:07 in the third quarter. They had three interceptions and two fumble recoveries on the night. “We needed that,” second-year USC head coach Lane Kiffin says to reporters after the game. “It was much more important for this team to win like that and have a game like that for confidence after all the things our defense has been hearing about them, staff, players, everybody involved. To come out here and get five turnovers and harass the quarterback all game long was really good.”

Cal head coach Jeff Tedford knows that no team could defeat the Trojans if they kept turning the ball over a lot.

“You can’t beat a good football team like SC when you turn the football over five times, especially down deep in their territory,” Tedford remarks. “There’s no question there is some good things, but there are some things that absolutely need to be improved.”

Midway in the third quarter, Heidari added another field goal that capped his three-for-three FG night. In the final period, running back Curtis McNeal rushed up the middle for a two-yard touchdown score. This marked the score at 30-9.

For the game, Barkley finished with 195 passing yards after completing 19 of 35 attempts with two touchdowns and no interceptions. McNeal carried the ball 17 times for a total of 86 yards, including a 16-yard rush. Marc Tyler rushed 11 times for 30 yards.

On the receiving end, only two receivers caught four or more passes. Sophomore Robert Woods led the way with five catches for 36 yards, but did not find the end zone. Lee, on the other hand, did score once after collecting four grabs for a total of 81 yards.

It was really an off night for the USC offense, and they will need to find their groove quickly because the team travels to Indiana over the weekend to face bitter enemies Notre Dame Saturday, Oct. 22, at 4:30 p.m.

The UCLA Bruins are getting ready to square off against the visiting Arizona Wildcats on Thursday, Oct. 20, at 6 p.m. in Tucson.

UCLA (3-3, 2-1) is coming off a big win against Washington State, 28-25. UCLA quarterback Kevin Prince is looking forward to the mid-week affair that will be nationally televised.

“I think it will be a fun atmosphere,” Prince tells the Daily News. “I haven’t been able to play in a Thursday night game yet. It’ll be a lot of fun.”